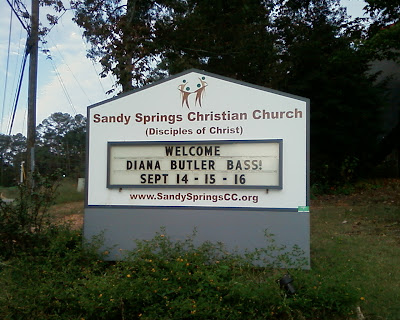 Okay, so my subject line was deliberately provocative, at least to those of you who know the creed by heart.  Recently, I read in one of my books (sorry, I forget which one) that The Apostles Creed skips the whole life of Jesus.  Look at these three "belief" sections:


I believe in God the Father Almighty,
maker of heaven and earth;

And [I believe] in Jesus Christ
his only Son our Lord:
who was conceived by the Holy Spirit,
born of the Virgin Mary,
suffered under Pontius Pilate,
was crucified, dead, and buried...

I believe in the Holy Spirit...

But before I get to the "comma" (or life of Jesus), let's look first at that repeated word believe in the creed.  I've been doing a series of posts about Diana Bulter Bass, based on her book Christianity After Religion and her seminar at Sandy Springs Christian Church (Disciples of Christ) near Atlanta.  She points out that word meanings have changed over the years.  The ancient sense of the word believe was "trust" or "devotion" (p. 132).  So the creed might be better translated this way:


I trust in God the Father Almighty...
And [I trust] in Jesus Christ...
I trust in the Holy Spirit...

Here's a link to an interview with Diana Butler Bass where the interviewer says, "The re-languaging of the Apostles Creed as a prayer of personal devotion versus a symbolic recitation of doctrine was a revelation."

"Recitation of doctrine" was a problem for me in my 20s and 30s and 40s as I was struggling with answers to my doubts and questions.  I would recite SOME of the words boldly and then mumble or remain silent on some of the others.  I didn't know until this year that I wasn't the only one.  I read this in part of Rebecca's story (pp. 33-34) in Proverbs of Ashes by Rita Nakashima Brock and Rebecca Ann Parker (2001), one of the best books I've read this year:


My grandmother Ernst was full of life as well.  I remember being in church as a small child, standing next to her for the reciting of the Apostles' Creed.  My grandmother would begin, "I believe in God the Father, maker of heaven and earth, and in Jesus Christ," then she'd close her mouth until she joined in again on the last phrase, "I believe in the communion of saints."  As a child I was impressed that though she was the minister's wife, she didn't do what we were supposed to.  "Grandma," I asked one Sunday, "why don't you say 'conceived of the Virgin Mary, descended into hell, rose again from the dead'?"

"Well!" she said, with a bustle of impatience, "Because it doesn't make any sense."  My grandmother approached religion like hemming a skirt.  She taught me to make the stitches strong enough to be visible on the outside.  The lesson was clear.  "Don't believe anything unless you can see that it is stitched together welll"

Smart grandma.  I still have problems with the Apostles Creed, especially the fact that it replaces the whole life of Jesus with a comma.  (More on the "comma" in another post.)
Posted by Bonnie Jacobs on 10/08/2012 01:19:00 PM
Labels: Diana Butler Bass