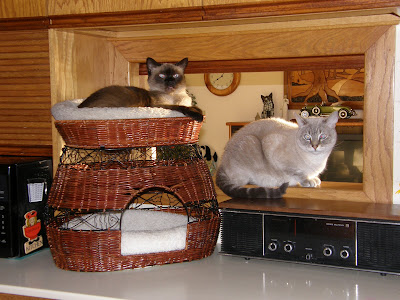 My high school friend Ginny was supposed to be here Friday from Florida, but she called on Tuesday to tell me she wouldn't make it after all.  Her cat Sophie has cancer and is dying.  This 2009 photo shows Sophie (on the left) and Max.  I haven't (yet) heard any news, but I expect a phone call any time.

I do have a "book report" for you, though.  I emptied three of those boxes of books stacked up in my apartment, and took most of them to McKay's, our huge used books store.  I used the resulting store credit to get a couple more books.  This was "unplanned," except that I can't even remember the last time I was in a bookstore and left without a book.

Gnostic Secrets of the Naassenes: The Initiatory Teachings of the Last Supper ~ by Mark H. Gaffney, 2004


In the third century C.E. the Catholic bishop Hippolytus composed "A Refutation of All Heresies," which chiefly targeted the Naassenes, a Gnostic sect whose writings included a recounting of Jesus’ actual teachings at the Last Supper.  Ironically, Hippolytus includes this key “heretical” text in Book 5 of his condemnation — now referred to as the Naassene Sermon — which would otherwise have been lost to us.  Contrary to the denouncements of the Church, the sermon shows that the Naassenes were not a heretical derivative of Christianity, but instead were purveyors of Christ’s authentic message.  In this book, Gaffney deciphers the message recorded in the highly symbolic Naassene Sermon, a lesson intended for an inner circle of disciples who were prepared for advanced initiation into Jesus’s wisdom teachings.  These teachings address the awakening of spirit and include practices aimed at restoring the soul’s lost connection to God.  Most important, however, is their revelation of the central truth of immanence — the indwelling of the Divine as symbolized by the Grail.  According to the Naassenes, immanence in the true sense intended by Jesus allows for spiritual attainment by ordinary Christians in this life without the intermediary of Church or priest.  This was the real meaning of the Last Supper and why the Naassenes believed that Jesus was the fulfillment of all the Mystery traditions.

Somehow, the term "gnosticism" came up in Sunday school last week.  My explanation was (possibly) adequate, but I haven't read much about gnostics in years.  As I searched the shelves at McKay's, this book on gnostic secrets caught my attention.  Funny how that works, but the book did come home with me and now resides on a shelf with three others on gnosticism.

The first book I ever read on the subject is still probably the best:  The Gnostic Gospels by Elaine Pagels, published in 1979.  I read it five years before I went to seminary.  This quote from the introduction to her book (pp. xviii-xix) explains a little about the Christians who wrote the "gnostic" gospels found at Nag Hamadi in Egypt in 1945, books that were later considered heretical:


But those who wrote and circulated those texts did not regard themselves as "heretics."  Most of the writings use Christian terminology, unmistakably related to a Jewish heritage.  Many claim to offer traditions about Jesus that are secreet, hidden from "the many" who constitute what, in the second century, came to be called the "catholic church."  These Christians are now called gnostics, from the Greek word gnosis, usually translated as "knowledge."  For as those who claim to know nothing about ultimate reality are called agnostic (literally, "not-knowing"), the person who does claim to know such things is called gnostic ("knowing").  But gnosis is not primarily rational knowledge.  The Greek language distinguishes between scientific or reflective knowledge ("He knows mathematics") and knowing through observation or experience ("He knows me"), which is gnosis.  As the gnostics use the term, we could translate it as "insight," for gnosis involves an intuitive process of knowing oneself.  And to know oneself, they claimed, is to know human nature and human destiny.

Providence: The Story of a Fifty-Year Vision Quest ~ by Daniel Quinn, 1994, memoir


Quinn's life-long spiritual voyage takes him from a childhood dream in Omaha, that set him on a search for fulfillment, to his time as a postulant in the Trappist order under the guidance of eminent theologian Thomas Merton.  Later, his quest took him through the deep self-discovery of psychoanalysis, through a failed marriage during the turbulent and exciting 60s, to finding fulfillment with his wife Rennie and a career as a writer.  He also details his rejection of organized religion and his personal rediscovery of what he says is humankind's first and only universal religion, the theology that forms the basis for his book Ishmael.  This memoir is an insightful book that address issues of education, psychology, religion, science, marriage, and self-understanding, and will give insight to anyone who has ever struggled to forge and enact a personal spirituality.

The first of Quinn's books that I read was his novel Ishmael,"an adventure of the mind and spirit."  This is my fifth book by him, standing all together on a shelf.

I read and discussed If They Give You Lined Paper, Write Sideways with a friend on Sundays, back in 2007.

I love the "synchronicity" of finding both Gnostic Gospels and Ishmael in the same post on Words from a Wordsmith, which is another of my blogs.  The two titles are side by side on a meme asking me to list "five books that mean a lot to me" (#4).  I listed twelve books, and these two are side by side.  I wrote that post in October 2007, and five years later I buy two books which happen to be by those two authors.  I love coincidences!

On Monday, I posted something from The Onion that I thought was funny.  Beth did, too, but I'm not sure whether or not I offended Zorro, who left this comment:

Yesterday, I got Flannery O'Connor's A Good Man Is Hard to Find from the library and read the short story Zorro mentioned.  The newer copy in the system was checked out, so what I got was the first edition from 1955 (pictured here), though this stamped, marked-in, rough-edged, 57-year-old battered book's cover has faded to a sort of gray-on-tan color with the words barely visible.  Okay, the child narrator in the story misunderstands what she hears (read the Wikipedia article for yourselves), but I still don't know how serious Zorro is in her comment.  Help, Zorro!  'Splain, please.

On Friday, Alyce's 11-year-old son reviewed a book on her blog.  Toes by Tor Seidler (2004) sounded good, so I got it from the library, too.  I read it and the ending did indeed make me tear up because the cat dies.  (Okay, so it's a spoiler, but that's what "sad" means in a children's book.)  But what a gloriously intelligent cat Toes was!  Very like unto an 11-year-old boy in his innovative thinking.  I miss this enterprising and resourceful kitty already.  And I rate the book 10 of 10 because I couldn't put it down.  The only down side to reading the book was that I couldn't hear the violin music the cat loved.  Rated 10 of 10.

Reading Flannery O'Connor's short story connects me to Zorro, however tentatively, and reading Tor Seidler's chapter book for children about Toes connects me not only to Alyce, but also to her son.

Oh, a children's book about a dying cat? I would be a complete puddle of tears.

Helen, it is not about a dying cat, but a cat whose whole life was portrayed in this book. He died at the end of his life, not throughout the whole book.

Ginny, whose cat Sophie is at the top of this post, tried to leave a comment this morning -- and had to email me:

Such good cat pictures of both yours and mine on your blog!! I tried to write a comment but it said there was an "internal error". Here is the news: On Wednesday Sophie started eating after almost two weeks of not much! She has gained back a little weight. At an exam on Firday, the vet said it looked like her Urinary tract infection was mostly gone and that she might be fine for a while longer. She doesn't seem to be in pain and doesn't know she is eaten up with cancer, so is being royally spoiled for as long as she is not in pain. She is taking 3 pills, but might can be cut back to just one in a few days! We are grateful for every minute.

I really hated to miss coming, but it was the right choice as she needs good monitoring, pills downed, and fresh food every couple of hours. I haven't heard how the reunion turned out yet.

Thanks for your concern So far so good.

Ginny, the photo of your two cats was taken by you. not me. I asked you for some photos in 2009, and that was among the ones I got from you.

P.S. Dear readers, Ginny and I went to high school together, back in the late 1950s, so we've been friends well over a half-century. I knew her parents and sister, and she knew my family. Ginny went off to college and never came back! (Except to visit.)

I went back to Alyce's blog to thank her son for recommending this book. This is the comment I left there:

"I got the book, read the book, and wrote about the book today in my Sunday Salon post. You absolutely should read it, even though the end is sad, because Toes is the smartest and most innovative cat I'm ever known. Your son is right about how good the book is. Toes may have had a sad start, and he may have been bullied by the other kittens, but he went on to meet (and love) a musician who loved him back. Toes lived a rich, full life, befriending a dove and managing to do something so special that ... well, you just have to read it. Really! Yes, Toes dies, but only at the end of his life and great accomplishments. I rated the book at 10 out of 10, my highest rating. If your son had not reviewed the book, I would probably never have heard of it. So please tell him I said, Thank you so much!"

I'm glad that you liked Toes so much! I really was worried it would be a weep-fest. It's wonderful to hear that you share his high opinion of the book!