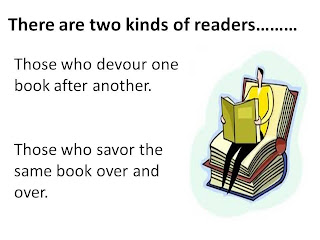 I devour books, though I occasionally read one over again.  I'm doing it now.  Let me tell you why.  On Sunday, October 14, 2007, I wrote about books I intended to review that day or the next.  That was posted exactly five years ago today (and it was even a Sunday).  The meme showed up on another of my blogs, Words from a Wordsmith, which rarely gets used these days, so I'll share the pertinent sections here:


2. Last book bought
I rarely buy one book at a time, so this is like trying to remember the last potato chip I bought.  Hmm, let me see, The Assault on Reason by Al Gore was among the last books I bought.

3. Last book read
This is a little easier because, even though I have several books going at any one time, I finish them one at a time.  The most recent two books I completed were Merle's Door by Kerasote and I Never Saw Paris by Harry I. Freund. I'll have both books reviewed by tomorrow evening.

Today's "book report" will be a report on whatever happened to these three books.

All it took to find this book was a glance to the right of where I'm sitting as I compose this blog post, and there's the book, on the bottom of a stack of 20-some books.  The dustjacket — yes, I bought it new, in hardback — says it analyzes "how the politics of fear, secrecy, cronyism, and blind faith has combined with the degradation of the public sphere to create an environment dangerously hostile to reason."  Yep, and it has only gotten worse in the last five years.  I need to read this book, plus another book in the same stack:  Al Gore's 1992 Earth in the Balance.

I actually got this reviewed.  While on a camping trip, Ted met a Labrador mix dog living in the wild.  When they became attached to each other, Ted name the dog Merle and brought him home.  When he realized Merle’s native intelligence would be diminished by living exclusively in the human world, Ted put a dog door in his house so Merle could live both outside and inside, thus "Merle's door."  I recognized some of the issues that both animals and humans face when living together, but I was fascinated when the author showed how dogs might live if they were allowed to make more of their own decisions.  This is a very touching story, and I very much wanted to know all about Merle.  Rated: 9/10, an excellent book.

On his way to a department store in Manhattan, 64-year-old businessman, Irving Caldman, is waiting at the intersection of Park Avenue with three other pedestrians, when a driver jumps the curb and runs them all over.  The next thing Irving knows, he is no longer preparing for a trip to Paris with his wife.  Instead, he is watching four faces as they ascend to heaven, on their way to be greeted by the angel Malakh.  Accompanying Irving are an attractive personal shopper in her early fifties; a grandmother who works as a housemaid nearby; a twenty-something man who is an interior decorator; and the driver, a candy store owner and widower.  Bound together for a week with Malakh, before their souls will be allowed to move on for judgment, Irving and his fellow victims must all tell the group their life stories, in order to evaluate and justify their earthly existence.  As their insecurities and deepest secrets are exposed, they argue at length, and yet come to a strange peace, in this unexpected parable.

I knew exactly where to locate this book, too, and I have started re-reading it. I remember really liking it the first time, and I'd like to get a review posted TODAY since I'm almost afraid to say "by tomorrow evening."  And that, dear friends, is why I'm re-reading this book.

ON THE HOME FRONT 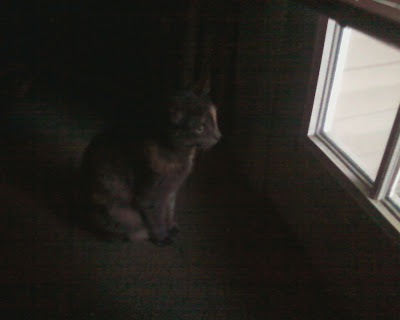 As it got dark last night, Sammy sat staring out the patio door.  Maybe she's still looking for Kiki to come home.  I think Sammy is lonely.