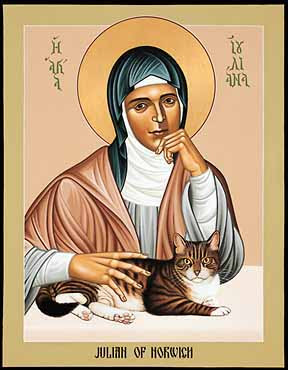 Julian of Norwich had a cat, see?  That sounds like the start of a nursery rhyme, but Julian (1342-1416) was a Christian mystic.  She is often depicted with a cat, and I have this quote from another blogger (that's gotta be worth a lot):

"Another tidbit I’d love to believe is that Julian had a cat.  There is absolutely no proof of her having a cat.  However, there is proof in the anchorite’s handbook, ANCRENE WISSE, that a cat was the only pet allowed to an anchorite AND there were a lot of rats around in medieval England so a cat would be considered a necessity.  Therefore, she probably had a cat."

These images confirm what's been said so far.  As you can see, a cat is in each one.  Of course, they can't be the same cat because they are different colors.  Hmm, so how many cats did Julian have?  A striped tabby with white tummy, a striped, orange-colored cat, a marmalade-colored one in the stained glass version, and here's one who looks somewhat like my Kiki cat, except for the tail and paws. 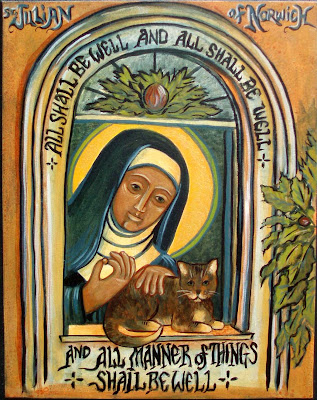 I have known many people who assumed that, if it's in a book, it must be true.  So here's my proof positive that Julian had a cat.  We can even pick which of these "portraits" is most accurate, judging by this synopsis of a book!  And look, the cat on the cover is yet another possible coloring. 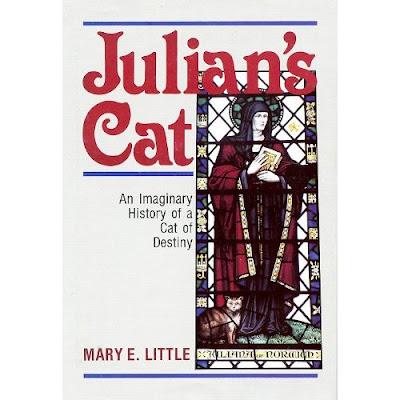 Julian's Cat: An Imaginary History of a Cat of Destiny ~ by Mary E. Little, 1989


In Norwich Cathedral there is a stained glass window depicting the great mystic, Julian of Norwich . In her hands she holds her book, Revelations of Divine Love, and at her feet sits possessively a regal cat the color of marmalade, staring boldly out at the world.  Who was this mysterious feline who so endeared himself to Mother Julian, the author wondered.  He must have a story.  The pranks of the slightly naughty but lovable cat will charm pet lovers, the tale of the little child who first loved him will touch the heart, and the language and richness of detail will transport the reader through the pungent streets of medieval Norwich and into the lives of many colorful characters.  Here is an enchanting adventure for Julian followers, anglophiles, and cat lovers of all ages.

If we credit the book with being closest to the truth, then we must find a marmalade-colored cat.  Do you see which cat that is?  Even better, do you see the famous quote from the Julian's writings?

That reflects her theology, depicted by her writing in one picture and holding a book in another.
Posted by Bonnie Jacobs on 10/13/2012 12:01:00 AM
Labels: Caturday, Kiki

This is so interesting! I am going to send a link to my cat-loving friends.

Glad you like it, Jan. This post shows the strange way my mind works. Cats and books catch my attention, and when both are together, so much the better.