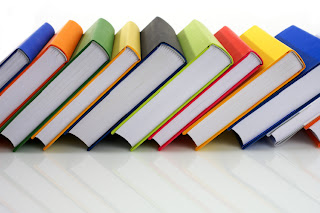 Rating books is an inexact science.  In fact, it isn't science at all, but how I feel about a book at a particular time.  How much we like or dislike a book is based on what's going on in our lives at the time we read it.  As I look over these "tens" (books I rated 10 out of 10) in 2011, they are all still among the best and most memorable.  You can read what I wrote earlier in the year about each book by clicking on the title.  Here's what I remember liking about each of these, shown alphabetically by category:


I love Enzo, the dog who is the main character of this novel.  Yes, even though I'm a cat person, I love this dog.  He makes more sense than some of the humans I know, and I like the way he thinks.  If you haven't read it, I highly recommend this book.  Photo found here.


My friend Donna bought this one for me as a joke.  My childhood nickname, which I never liked, was "Bitsy."  I didn't expect to like the book, which was indeed light reading.  It must have hit me at exactly the right time, because it was fun to read.  Two sisters buy a "B and B," which turns out to mean "Bait and BBQ."  They know nothing about fishing or running a restaurant.  Having owned a bookstore, I know it isn't this easy to set up a business and have it succeed beautifully.  But I enjoyed the happy ending.


I rarely read mysteries and got this because the protagonist is a clergywoman — an Episcopal priest.  Yup, she also helps the local lawman solve a case.   Both of them are former Army, and she flew helicopters.  She's also a Southerner, like me, and managed to get stuck in two inches of snow, which I mentioned in my review.  Because this author kept me reading nonstop through this one, I plan to read more of her books.


This protagonist became a clergywoman after the death of her husband, though she didn't serve as pastor of a church, as I did.  Rather, she served as chaplain for search-and-rescue missions in the Maine woods, giving comfort to people whose loved ones are missing.  I am a little bit knowledgeable about search-and-rescue work because I read a book Wendy recommended in 2007, when I was a new blogger:  Place Last Seen by Charlotte McGuinn Freeman, 2000, fiction (California), which I rated 9 of 10.


This novel is about 17-year-old Mia, a talented cellist, who has been in a terrible auto accident.  She lost family members, and life will never be same again.  If she decides to stay.  Although she's unconscious, she is aware of the people around her — nurses, grandparent, boyfriend.  And the whole book is about her decision.  What will she do?  What would you do, if you were in her place?  Having played bassoon in my high school's concert band and orchestra, I liked that the book centers around music.


This book is like a "verbal video," starting with being told to "picture yourself sitting in the darkness, like the beginning of a movie.  On screen, the sun will soon rise, and you will find yourself zooming toward a train station in the middle of the city."  That city is Paris, and Hugo lives in the train station.  I enjoyed the drawings from the book, several of which I included in my review.  It's an imaginative book that makes the reader open her mind and "see." 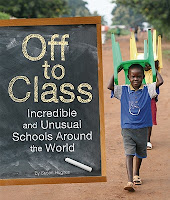 Off to Class: Incredible and Unusual Schools Around the World ~ by Susan Hughes, 2011, essays for middle grades, 10/10


There’s a whole world of unusual schools:  schools on boats, in a cave, on train platforms, on buses, and even in a treehouse.  My friend Donna taught for twenty-plus years, mostly middle school English, and has an M.Ed. in Curriculum and Instruction, so I got her to read this too.  I was impressed by the innovative ideas, like curved hallways for blind students, rather that the long, straight halls of most schools.  Donna liked the way the book was organized, with activities that could be used, and yet it wasn't "dumbed down" for middle school readers.


The only time I mentioned this book, I just discovered, was in the comments on a library loot post about two books about twins.  Tongue in cheek, Sean said, "I sense there's a theme you are hinting at with your choices."  Yes, I learned about the two library books at the same time and put both on reserve.  Then I discovered — on my own dining table — that my roommate had a copy of this book.  My daughters are identical twins, so I always notice books and articles about twins.  A 13-year-old travels from Nebraska to Washington state to find the twin sister from whom she was separated at age three.  It's the best of the twin books I read in November.


One of my blogger friends, one I've actually met, was in Key West when I came across this book, which is set in Key West.  There's probably little or nothing the same as what my friend experienced there, since the book takes place in 1935, but I did recommend it to her.  It's a 2011 Newbery book, filled with adventures of the 11-year-old kind, including a search for pirate treasure and the hurricane of 1935. 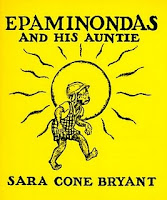 
This book has been challenged as racist because it depicts a black child as “completely idiotic and stupid.” Epaminondas is neither stupid nor an idiot.  He is struggling to do the right thing, just as I did, when I was a child.  If the adults had been careful of their language, which the poor kid took literally, the outcome would have been different — though we wouldn't have much of a story here.  This book is like Aesops Fables, something that makes us think.


This one reminds me of one of my all-time favorite children's books:  Cathedral by David Macauley, 1973, showing step by step how a cathedral was built.  Laura Amy Schlitz shows us the makeup of a medieval village, looking closely at the various activities of young and old, merchants and craftsmen.  I had a little trouble finding all the tiny people, but the book kept my attention and taught me a lot about medieval times. 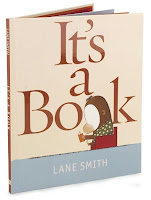 
Although I read this picture book in a few minutes, I didn't return it to the library for several days.  Donna, my roommate, fell in love with it and wanted to show it to several friends.  She plans to buy herself a copy.  Yes, she's that in love with the book.  I'd have gotten her a copy for Christmas, but I was afraid it wouldn't arrive in time.  The jackass can't relate to anything but his laptop, no matter how many times the monkey and the mouse say, "It's a book."  It doesn't need a password, it doesn't toot its horn, and it doesn't have to be recharged.  It's a book! 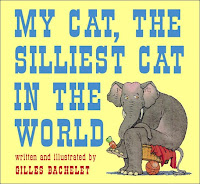 
The guy has a cat, but it isn't a cat at all — it's a big gray thing with a trunk.  Aw, c'mon!  You know what it is.  An elephant, see?  The guy paints his "cat" in all sorts of art styles, having it do cat kinds of things:  eat, sleep, chase a ball of yarn.  Children will have fun thinking they are smarter than that artist who can't tell a cat from an elephant.  And a very agile elephant it is, too. 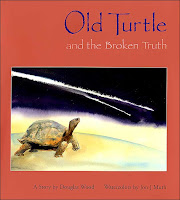 
This is the sequel to Douglas Wood's bestselling fable of ecology and spirituality called Old Turtle.  I like this one even more that the first.  The whole earth is full of suffering and war until one little girl seeks Old Turtle, who tells her about a "broken truth" and how mending it will help her community to understand the common bond of all humanity.  The partial truth the people had was that YOU ARE LOVED.  But the missing part has the possibility of bringing people together.  What's missing?  ... AND SO ARE THEY. 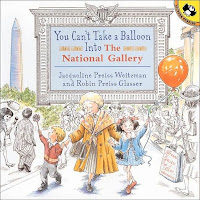 You Can't Take a Balloon Into the National Gallery ~ by Jacqueline Preiss Weitzman, illustrated by Robin Glasser, 2000, children's (Washington, DC), 10/10


A girl arrives with her brother and grandmother at the National Gallery with an orange balloon.  She knows she can't take it inside, so she finds someone to take care of her balloon until she returns.  In side-by-side pictures we see the balloon's adventures, which parallel what the children are inside.  Of course, the balloon floated away.  And of course, it ends happily.  The sisters who dreamed up this book together did a great job. 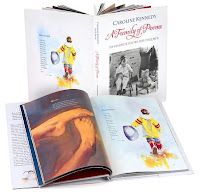 A Family of Poems: My Favorite Poetry for Children ~ by Caroline Kennedy, illustrated by Jon J Muth, 2005, poetry, 10/10


I like the combination of wonderful poems and paintings, which means this book can be enjoyed by adults as much as children.  And I like what Caroline wrote in the Introduction:  "In our family, we were encouraged to write or choose a favorite poem for each holiday or birthday as a gift for my mother and grandparents instead of buying a card or present.  My brother and I would copy over and illustrate our choices, and my mother pasted them in a special scrapbook.  When I look through that poetry scrapbook today, it reminds me of our last-minute races to find the best poem, and it evokes who we were as well as if it were a photo album."

As I looked over this list, I decided to choose the best of the best.  In other words, my favorite of all the books I've read this year.  Since I had already lined up the five categories and alphabetized the titles within each category, it is a total coincidence that my favorite happens to be at the top of the list.

Booking Through Thursday (BTT) asked (on Thursday, the day after I posted this):

The Julia Spencer-Fleming series is one of my favourite discoveries of this year too. I also really liked If I Stay and Where She Went by Gayle Forman.

I've been seeing If I Stay all around, and I'm tempted.

I agree with what you said about how books affect us and why. Definitely my favorites hit me at that special place inside (warm and fuzzy?). But that's not exactly it, either. I tried to explain it a bit here at MY BTT POST and
MY WEBSITE

I'll have to look into The Art Of Racing In the Rain.

Great list, I also loved The ARt of Racing in the Rain and If I Stay. I've added the school book to my list and I got Runaway Twin for Christmas!

I read Runaway Twin today and really enjoyed it! Thank you for the recommendation

"Rating books is an inexact science. In fact, it isn't science at all, but how I feel about a book at a particular time. How much we like or dislike a book is based on what's going on in our lives at the time we read it."
Well said ! As I'm trying to put together my best of 2011 list, I'm also following that exact line of thought.
Wish me luck !!

I do wish you luck, Maphead. It's hard to decide what's best. Even in hindsight, I sometimes want to change a rating because it's more (or less) memorable than I had thought.

As much as I read I haven't read one on your list. I'll start with Enzo.