The Five Books of Miriam: A Woman's Commentary on the Torah ~ by Ellen Frankel, 1996, religion.


"Weaving together Jewish lore, the voices of Jewish foremothers, Yiddish fable, midrash and stories of her own imagining, Ellen Frankel has created in this book a breathtakingly vivid exploration into what the Torah means to women. Here are Miriam, Esther, Dinah, Lilith and many other women of the Torah in dialogue with Jewish daughters, mothers and grandmothers, past and present. Together these voices examine and debate every aspect of a Jewish woman's life — work, sex, marriage, her connection to God and her place in the Jewish community and in the world."

The Teacher's Funeral: A Comedy in Three Parts ~ by Richard Peck, 2004, YA fiction (Indiana)


"If your teacher has to die, August isn't a bad time of year for it," says Russell Culver, fifteen, who's raring to light out for the endless skies of the Dakotas to join a team of harvesters working the new 1904 all-steel threshing machines. School's only standing in the way of his Dakota dreams. Maybe now with his teacher in the ground, Hominy Ridge School will shut down for good.

Steal Away Home ~ by Lois Ruby, 1994, YA historical fiction (Kansas)


"When twelve-year-old Dana Shannon starts to strip away wallpaper in her family's old house, she's unprepared for the surprise that awaits her. A hidden room — containing a human skeleton! How did such a thing get there? And why was the tiny room sealed up? With the help of a diary found in the room, Dana learns her house was once a station on the Underground Railroad. The young woman whose remains Dana discovered was Lizbet Charles, a conductor and former slave. As the scene shifts between Dana's world and 1856, the story of the families that lived in the house unfolds. But as pieces of the puzzle begin to fall into place, one haunting question remains — why did Lizbet Charles die?"

Missing May ~ by Cynthia Rylant, 1992, YA fiction (West Virginia)


"When May dies suddenly while gardening, Summer assumes she'll never see her beloved aunt again. But then Summer's Uncle Ob claims that May is on her way back--she has sent a sign from the spirit world.Summer isn't sure she believes in the spirit world, but her quirky classmate Cletus Underwood--who befriends Ob during his time of mourning--does. So at Cletus' suggestion, Ob and Summer (with Cletus in tow) set off in search of Miriam B. Young, Small Medium at Large, whom they hope will explain May's departure and confirm her possible return." 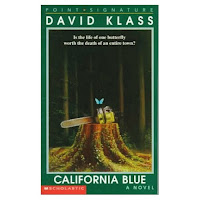 
"Teenager John Rodgers and his dying father find themselves on opposite sides of an environmental battlefield. At issue is a new species of blue butterflies that John discovers on a jog through land owned by the lumber mill that employs his father and most of his town. An ALA Recommended Book for Reluctant Readers and a School Library Journal Best Book of the Year."

What a fun day at the local bookstore! Enjoy your new reads

I own California Blue, it's a pretty good one although it's been many years since I read it. Richard Peck is always good too.

All the books by Richard Peck that I've read have been good, which is why I got this one.