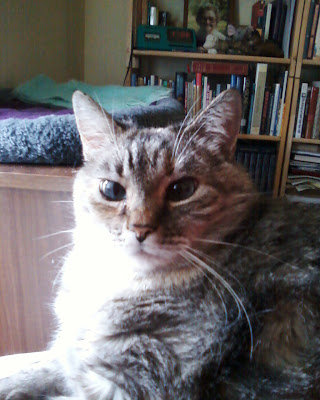 I was reading the end of this book and started sobbing.  That was so unexpected and so unlike me, that Kiki flipped over and turned to stare (she had had her back snug up against me, as in the recent photo I posted).    Even while crying, I knew I wanted this picture.  Poor Kiki.  I never sob, never!  A tear or two, maybe, but no sobbing.  This time, I couldn't help myself, though I knew it was coming.

Kiki posted the beginning of this book a week ago.  Since it gives you a clue to what happens near the end of the book, I'll repeat it here.  The dog on the cover is Enzo, and he's dying.


"Gestures are all that I have; sometimes they must be grand in nature.  And while I occationally step over the line and into the world of the melodramatic, it is what I must do in order to communicate clearly and effectively.  In order to make my point understood without question.  I have no words I can rely on because, much to my dismay, my tongue was designed long and flat and loose, and therefore, is a horribly ineffective tool for pushing food around my mouth while chewing, and an even less effective tool for making clever and complicated polysyllabic sounds that can be linked together to form sentences.  And that's why I'm here now waiting for Denny to come home -- he should be here soon -- lying on the cool tiles of the kitchen floor in a puddle of my own urine."

When she read that, Kiki said, "Uh-oh!  That doesn't sound good at all."  Let me quickly add that you do want to read this one.  First, because it is ultimately a feel-good story.  But also because Enzo is a great dog, who happens to be a darned good philosopher.  Here's an example of Enzo's thinking (from pages 19-20):


I'll give you a theory:  Man's closest relative is not the chimpanzee, as the TV people believe, but is, in fact, the dog.

It is my opinion that the so-called dew claw, which is often snipped off a dog's foreleg at an early age, is actually evidence of a preemergent thumb.  Further, I believe that men have systematically bred the thumb out of certain lines of dog through an elaborate process called "selective breeding," simply in order to prevent dogs from evolving into dexterous, and therefore "dangerous," mammals.

I also believe that man's continued domestication (if you care to use that silly euphemism) of dogs is motivated by fear:  fear that dogs, left to evolve on their own, would, in fact, develop thumbs and smaller tongues, and therefore would be superior to men, who are slow and cumbersome, standing erect as they do.  This is why dogs must live under the constant supervision of people, and are immediately put to death when found living on their own. ...

The full moon rises.  The fog clings to the lowest branches of the spruce trees.  The man steps out of the darkest corner of the forest and finds himself transformed into...

I loved Enzo and this book as well. Bonnie, you must read -- "I thought You Were Dead" by Pete Nelson, another story that was narrated by a dog, that I loved even more! If you like audio books, that one is terrific.

Kiki looks distressed! I think she's trying to say, "Do not sob around me, especially if it has to do with . . . you know . . . those other creatures." I assume the dog dies? I haven't read the book, yet, but I've got a copy. Figures. I seem to have one of everything.

Thank goodness I am not the only one who sobbed at the end of this book! It was so good, wasn't it?!

I have discovered a YouTube book trailer for this book, and it exactly captures who Enzo really is:

I wrote about this book again here:
https://bonniesbooks.blogspot.com/2018/02/book-beginnings-cats-thoughts-about-dog.html

But I confused people because I used my cat Kiki's post from 2011, saying it was "a cat's thoughts about a dog."

Bonnie, you are not alone! I listened on audio and was finishing up the book while getting ready for work - hair, and make-up and then - bawling. Sobbing really.... mascara running down my face, eyes stinging... it's funny to say that and then say it was an amazing book - but it was. I too rated it high and it definitely has a place on my bookshelves.