Beginning ~ with a bridge game 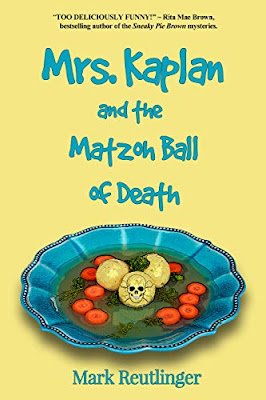 Beginning
Our Mrs. Kaplan is not what you would call competitive.  Now her late husband, Sam (of blessed memory), he was competitive.  As a young man he was a terrific tennis player, and he never tired of telling us about how he once beat a world champion, even if at the time Sam was sixteen and the champion was only twelve and had not yet hit his stride.  He also told us how he won Mrs. K's hand by outmaneuvering two shlemiels who were trying to win her first.  But Mrs. K?  Even at bridge she plays only for fun, never to win, and don't think that doesn't drive her partners crazy.  Sometimes I tell her, "Rose," I say, "even if you don't care whether you win or not, would it kill you to try a little harder for your partner's sake, at least when I'm your partner?"
Mrs. Kaplan and the Matzoh Ball of Death ~ by Mark Reutlinger, 2014, cozy mystery, 244 pages
Everyone knows that Rose Kaplan makes the best matzoh ball soup around — she’s a regular matzoh ball maven — so it’s no surprise at the Julius and Rebecca Cohen Home for Jewish Seniors when, once again, Mrs. K wins the honor of preparing the beloved dish for the Home’s seder on the first night of Passover.  But when Bertha Finkelstein is discovered face down in her bowl of soup, her death puts a bit of a pall on the rest of the seder.  And things go really meshugge when it comes out that Bertha choked on a diamond earring earlier stolen from resident Daisy Goldfarb.  Suddenly Mrs. K is the prime suspect in the police investigation of both theft and murder.  Oy vey — it’s a recipe for disaster, unless Rose and her dear friend Ida can summon up the chutzpah to face down the police and solve the mystery themselves.

That beginning is a lot of fun. I feel like I heard of this book back in the day, but now I want to read it.

I would absolutely read Mrs. Kaplan and the Matzoh Ball of Death! What a great start!

This sounds like a lot of fun! Thanks for sharing! Hope you have a great weekend! :)

Hi Bonnie. I always feel so special when you comment on my blog. I wish I could get more interested in this book but I get so involved with what is happening to our wonderful country that I can't seem to concentrate on light reading. I wish I could.