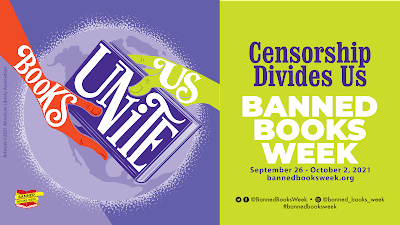 I'm glad I reminded you! I do find it interesting to see which books are banned and why. If the people who do the banning spent that much energy on enjoying all literature, the world would be a better place.

Top ten banned books in 2017 (that I posted on Facebook):

The Wish Giver by Bill Brittain
An Alphabet for Rotten Kid by Davide S. Elliot
A Light in the Attic by Shel Silverstein
Jean Has Two Moms (Jean a deux mamans) by Ophélie Texier
Blood and Chocolate by Annette Curtis Klause
The Color Purple by Alice Walker
The Jungle by Upton Sinclair
Tropic of Cancer by Henry Miller
Black Boy by Richard Wright
This One Summer by Mariko and Jillian Tamaki