Jesus may not be who you think he is 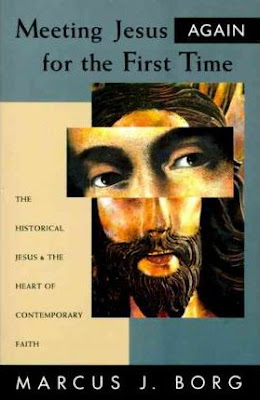 
"In Hebrew (as well as in Aramaic), the word usually translated as 'compassion' is the plural of a noun that in its singular form means 'womb.'  In the Hebrew Bible, compassion is both a feeling and a way of being that flows out of that feeling.  Sometimes it is very specifically linked to its association with womb:  a woman feels compassion for the child of her own womb; a man feels compassion for his brother, who comes from the same womb.  As a feeling, compassion is located in a certain part of the body ― namely, in the loins.  In women, as one would expect, this means in the womb; in men, in the bowels.  Thus we have that somewhat odd biblical expression 'his bowels were moved with compassion.'  But obviously it is the same part of the body" (p. 47).

"For Jesus, compassion was more than a quality of God and an individual virtue: it was a social paradigm, the core value for life in community" (p. 49).

"Compassion, not holiness, is the dominant quality of God, and is therefore to be the ethos of the community that mirrors God" (p. 54).

"Jesus knew God as the compassionate one, not as the God of requirements and boundaries. The life to which he invited his hearers was the life in the Spirit that he himself had experienced. The narrow way, the road less traveled, is life centered in the Spirit of God" (p. 87).

"The multiplicity of images for speaking of Jesus' relationship to God (as logos, Sophia, Son ― to name but a few) should make it clear that none of them is to be taken literally.  They are metaphorical.)" (p. 109).

"To illustrate the claim that all Christological language is metaphorical, I share a story that I owe to John Dominic Crossan.  Asked by an exasperated questioner, 'Do you believe Jesus was the Son of God or don't you?'  Crossan replied, 'Yes ― I believe he was the Son of God, and the Word of God, and the Lamb of God.'  The point of the reply is clear, even though it was not appreciated by the questioner (who said, 'You theologians!  You're all alike!').  Just as Jesus is not literally 'the Lamb of God' (he was not a sheep), and not literally the Word of God (what would that mean?), so also he is not literally 'the Son of God' (what would it mean for this to be literally true ― biological sonship?).  Rather, all involve the metaphorical use of images" (p. 118).

"The image of Jesus I have sketched ... His own self-understanding did not include thinking and speaking of himself as the Son of God whose historical intention or purpose was to die for the sins of the world, and his message was not about believing in him. Rather, he was a spirit person, subversive sage, social prophet, and movement founder who invited his followers and hearers into a transforming relationship with the same Spirit that he himself knew, and into a community whose social vision was shaped by the core value of compassion" (p. 119).

These are quotes from this excellent book that I want to remember.   I rate this book 9 of 10, partly because I don't think it quite measures up to Borg's later book The Heart of Christianity (2003), which I gave a 10 of 10.  Still, these are ideas that I want to share, both with Christians who see a magical God image for Jesus and for non-Christians who want to lump me in with those who misunderstand metaphors.
Posted by Bonnie Jacobs on 4/03/2019 11:30:00 AM
Labels: Borg, Marcus J. Borg