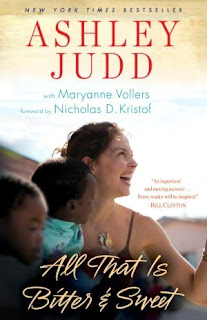 
Ashley Judd found her calling:  as a humanitarian and voice for those suffering in neglected parts of the world.  As she worked with suffering women and children in Asia and Africa, she realized that she was struggling with her own emotional pain, stemming from childhood abandonment and abuse.

I started this post about a month ago, when I learned that Ashley Judd (her blog) might run against Mitch McConnell for his Kentucky U.S. Senate seat in 2014.  I wanted to know more about her and was impressed by what I found. 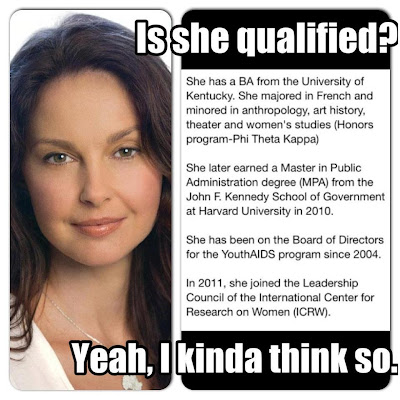 So I got her memoir from the library and started reading it.  Oops!  When I was beginning to really like this woman, she decided not to run for office.  Nevertheless, what she wrote is very informative.  Not only did I see Asia and Africa through her eyes, but I also learned about her own feelings of isolation and depression.


"A familiar, gnawing emptiness haunted my days and nights.  I could feel the trapdoor underneath me opening again.  I was having trouble modulating my behavior; I'd swing back and forth between being paralyzed and overdoing whatever I undertook.  I might be able to confidently lobby archconservative Senate majority [*] leader Mitch McConnell in his chambers, but I couldn't seem to manage the simple task of finding a comfortable chair for my writing desk. ... I could become irritable and unreasonable without knowing it and was unable to place things in their proper perspective" (p. 163).


* Actually, according to Wikipedia, Mitch McConnell "has been the Minority Leader of the Senate since January 3, 2007."

Because the subject is heavy, reading was slow.  I would take long breaks in between reading chapters or even sections of chapters.  For that reason, I rate this book 7 of 10, a good book.  It made me think, and I do believe she would make a good senator.  Since she lives in Tennessee (my state), maybe someday she'll run for office and I can vote for her.
Posted by Bonnie Jacobs on 4/18/2013 02:22:00 PM
Labels: book review

I hadn't heard that she was going to run for office, an intriguing idea. And she has an impressive resume, I didn't know that