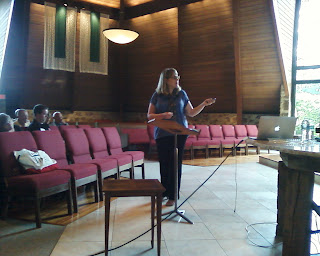 Diana Butler Bass used lots of visuals in her presentation a week ago.  Here, she is pointing to the screen.  She says "four shocks" contributed to our current climate of faith. 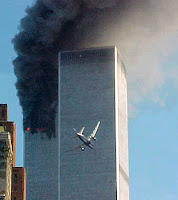 2001 ~ religion was associated with VIOLENCE after September 11th and the planes flying into the towers.

2002 ~ religion was associated with ABUSE after the Roman Catholic scandal.

2003 ~ religion was associated with INCIVILITY and EXCLUSION after mainline conflict about gays.

2004 ~ religion was associated with PARTISANSHIP after the evangelical entanglement with politics.

In other words, religion didn't look so good any more, and "unaffiliated" (with 4% atheist) became the fastest-growing group on polls of religious affiliation.  Add agnostics to those who are unaffiliated, and we have 9% who are out of religion.  When polls asked whether people are spiritual or religious (or both, or neither), two numbers had changed dramatically between 1999 and 2009:
But the other two changed a lot:
What do people mean by the words?


RELIGION:  "An institution that has organized matters pertaining to belief and that derives authority from external sources." 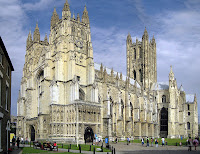 
SPIRITUAL:  "An experience that connects one with a deeper sense of self and the divine, wherein authority is validated through internal sources."

To sing "He Lives" ("he walks with me and he talks with me") is a form of testimony.  It is self-authenticating, something experienced within oneself.  And experiential religion means you "get it" inwardly.  Head knowledge becomes heart knowledge. 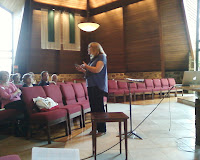 Diana Butler Bass refers to what she calls the THREE B's.  She suggests the kinds of questions a poll might ask to learn where a person stands in each category:
But these categories can also be delineated as either religious questions or spiritual questions:

Believing:  What do I believe? ~ and we get Creeds and Dogma
Behaving:  How do I do that? ~ and we get Rules and Techniques
Belonging:  Who am I? ~ and we have Membership and Choices

Believing:  How do I believe that? ~ and we refer to Experience and Reason
Behaving:  What should I do now? ~ derived from Discernment and Purpose
Belonging:  Whose am I? ~ which is about Relationship and Community

The construction of selfhood has shifted from individualism to asking, Who are my friends?  It's about community.  So today we have social networking, not merely a tool but a way of life.  It's the place where community happens.  The need for connection is powerful, as shown by Twitter, Facebook, and all the rest of the social networks.