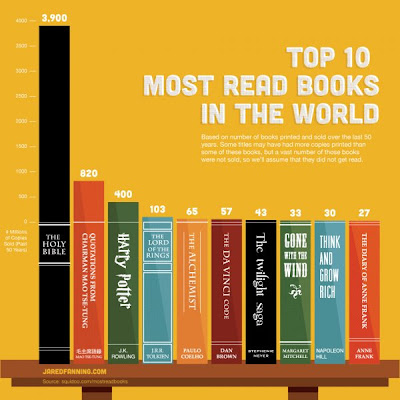 The Protestant version of the Bible is actually 66 books (with 39 "books" in the Old Testament plus 27 "books" in the New Testament) and "Harry Potter" includes seven books, so I don't know how somebody chose these ten titles.  I've read the whole Bible several times, the first three Harry Potter books, The Alchemist, The Da Vinci Code, Gone with the Wind, and The Diary of Anne Frank.  That's more than half this list.  So how many of these have you read?

Printed in white and difficult to read:


"Based on number of books printed and sold over the last 50 years.  Some titles may have had more copies printed than some of these books, but a vast number of those books were not sold, so we'll assume that they did not get read."

Wow, what an interesting assortment of books and a fascinating poll!

I've only read the Harry Potter series, Anne Frank, and The Da Vinci Code on this list (and parts of the The Bible), but I saw the movie adaptations of Gone with the Wind and Lord of the Rings!