My roommate Donna checked out a bunch of children's picture books from the library.  All but one are by Douglas Wood, so I had to read them — because Douglas Wood's Old Turtle and the Broken Truth (2003) is one of my favorites.  Here's what she brought home: 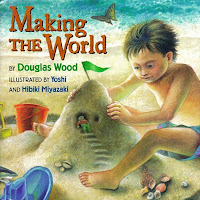 Making the World ~ by Douglas Wood, illustrated by Yoshi and Hibiki Miyazaki, 1998, children's, 9/10 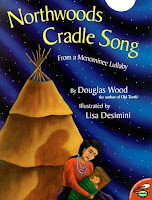 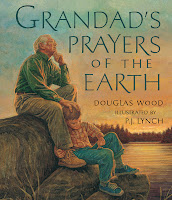 
"Are our prayers answered, Grandad?" I asked.
"Grandad smiled.  "Most prayers are not really questions," he said.  "And if we listen very closely, a prayer is often its own answer.  Like the trees and Winds and waters, we pray because we are here — not to change the world, but to change ourselves.  Because it is when we change ourselves . . . that the world is changed." 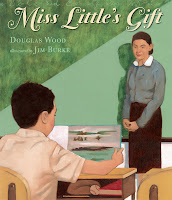 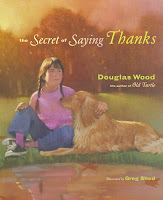 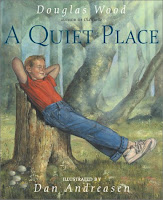 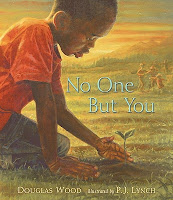 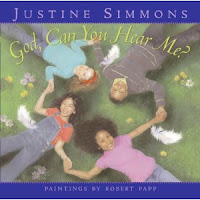 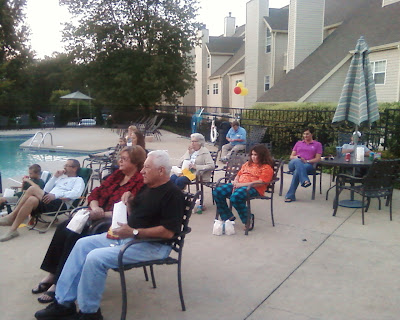 On Friday night, we had movie night out by the pool at my apartment complex.  That's Donna dead center, behind the man's shoulder.  We got free popcorn (in those white bags), soft drinks, boxes of movie candy, and three kinds of pizza, as well as prizes. 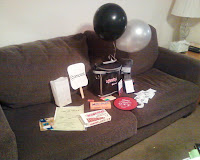 I won a $25 gift card, and Donna won an insulated bag full of goodies:  three helium-filled balloons (which promptly became cat toys), five coupons for "one free movie on demand," a $15 iTunes gift card, a small lap blanket, and several other small items.  All in all, it was a fun evening, except that the mosquitos found me.  I'm very allergic to bites, so my left elbow and arm are still swollen from several bites.  And it won't stop itching, even after taking my allergy pill, rubbing on itch medicine, and zapping it with hot water and hot blow dryer. 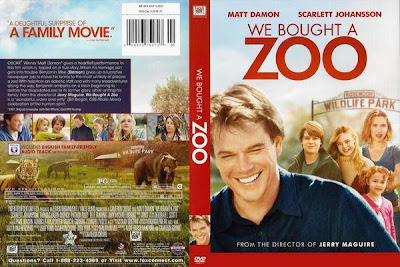 The movie we saw, once it got dark enough, was We Bought a Zoo, a 2011 comedy-drama film based on the 2008 memoir of the same name by Benjamin Mee.  It tells the story of Mee and his family who just moved into a dilapidated zoo and took on the challenge of preparing the zoo for its reopening to the public.

Good to have you around, Bonnie! Sounds like a fun movie night.

I love the concept of outdoor movies, but also hate the mosquitos! We enjoyed We Bought a Zoo, it was cute and interesting that it was based on a true story. And winning prizes? That just makes the evening all the more fun!

Have a great week

Wow, you live in a really fun apartment complex, Bonnie! Sorry that mosquitos crashed the party, though.

I love children's books! Sounds like Donna picked some good ones. Which of all those did you (and Donna) like best?

Beth, my favorite of these books was...

If you click on my "Book rating guide" in the right sidebar just above the clock, you'll see how I rate books: