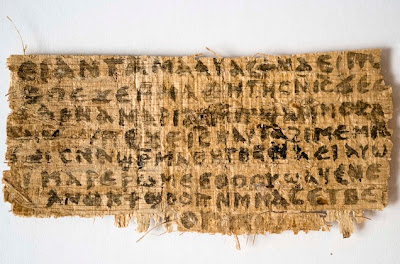 This morning I'll be teaching the Seekers Sunday school class.  They'll be my face-to-face Sunday Salon discussion.  Yes, they talk.  They aren't bashful, and the class often goes off on a tangent to something one of them read or saw or heard about.  Recently we talked about the newly surfaced papyrus fragment about Jesus's wife that Harvard Divinity School professor Karen L. King announced at the International Association for Coptic Studies, meeting in Rome earlier this month.  The Vatican has, of course, already called it a fake.  One line ends this way:

Dr. King said in the Harvard Gazette article "Suggestion of a married Jesus" by B. D. Colen:


“Christian tradition has long held that Jesus was not married, even though no reliable historical evidence exists to support that claim,” King said. “This new gospel doesn’t prove that Jesus was married, but it tells us that the whole question only came up as part of vociferous debates about sexuality and marriage. From the very beginning, Christians disagreed about whether it was better not to marry, but it was over a century after Jesus’ death before they began appealing to Jesus’ marital status to support their positions.”


Twice in the tiny fragment, Jesus speaks of his mother and once of his wife — one of whom is identified as “Mary.” The disciples discuss whether Mary is worthy, and Jesus states that “she can be my disciple.”

The idea of women disciples can be just as controversial with some folks as whether or not Jesus was ever married.


“The discovery of this new gospel,” King said, “offers an occasion to rethink what we thought we knew by asking what role claims about Jesus’ tmarital status played historically in early Christian controversies over marriage, celibacy, and family. Christian tradition preserved only those voices that claimed Jesus never married. The Gospel of Jesus’ Wife now shows that some Christians thought otherwise.”

Those of you who regularly read this blog know this is the kind of thing that interests me.  It's kind of fun to have people in the class call or email me to tell let me know about things like this, usually found in that morning's paper.  When Jane, my friend from that class, called me early on the day this news broke, she said, "Darn!  I thought surely I'd beat you to this news!"  Nope, I'm a night owl and read about it during the night before, online. 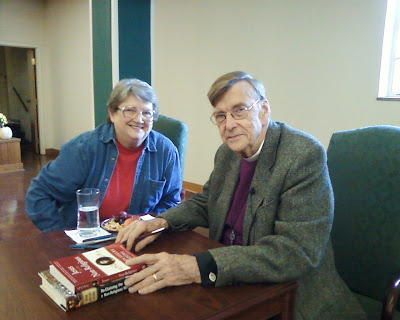 This morning we will be continuing to study from Bishop John Shelby Spong's 2011 book, Re-Claiming the Bible for a Non-Religious World.  That's one of the books he signed for me when I heard him speak in November.  It's the thicker book, on the bottom, and that's why the class is still plugging away at it, months later.

The Seekers Class is interested in some cutting edge theology and has been called by a few "The Heretic Class."  If you lived around here, would you be brave enough to check us out?  I guarantee a more exciting discussion than most of what you'll find on Sunday mornings.

I love that you are asking your Sunday School class about controversial topics! That will help them critically think about all sorts of topics in school and in life as they grow up. Yay, people who think! :-)

Uh, these people are elderly, and (except for a college professor and one adjunct -- me) not a one of them is still in school. Two are exactly my age (72), and I think most of the rest are even older -- or getting there. But they think! Even though old folks usually get a bad rap and are said to resist change, I'm in a group that shatters that stereotype.

I would love to visit your Sunday School class!

Alison, shall we do Sunday school online? We could do it like Book Buddies and all chat on our own schedule.

Bonnie, That would be lovely!