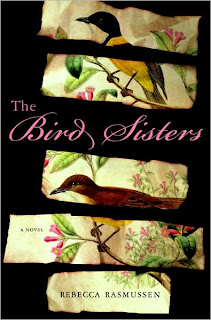 
From the dust jacket:  "When a bird flies into a window in Spring Green, Wisconsin, sisters Milly and Twiss get a visit. Twiss listens to the birds' heartbeats, assessing what she can fix and what she can't, while Milly listens to the heartaches of the people who've brought them. These spinster sisters have spent their lives nursing people and birds back to health.  But back in the summer of 1947, Milly and Twiss knew nothing about trying to mend what had been accidentally broken. Milly was known as a great beauty with emerald eyes and Twiss was a brazen wild child who never wore a dress or did what she was told. That was the summer their golf pro father got into an accident that cost him both his swing and his charm, and their mother, the daughter of a wealthy jeweler, finally admitted their hardscrabble lives wouldn't change. It was the summer their priest, Father Rice, announced that God didn't exist and ran off to Mexico, and a boy named Asa finally caught Milly's eye. And, most unforgettably, it was the summer their cousin Bett came down from a town called Deadwater and changed the course of their lives forever."

I got the next two books because of a comment Claire (The Captive Reader) left on someone else's blog:

Actually, I already own this next one, having won it from Dewey in 2008.  Since I let my friend Donna borrow it, I went ahead and got this copy from the library. 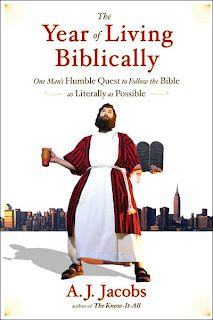 The Year of Living Biblically: One Man's Humble Quest to Follow the Bible as Literally as Possible ~ by A. J. Jacobs, 2007, memoir


From the dust jacket:  "Raised in a secular family but increasingly interested in the relevance of faith in our modern world, A.J. Jacobs decides to dive in headfirst and attempt to obey the Bible as literally as possible for one full year. He vows to follow the Ten Commandments. To be fruitful and multiply. To love his neighbor. But also, to obey the hundreds of less-publicized rules: to avoid wearing clothes made of mixed fibers. To grow his beard. To stone adulterers. The resulting spiritual journey is at once funny and profound, reverent and irreverent, personal and universal. Jacobs also embeds himself in a cross-section of communities that take the Bible literally, including the Amish and the Hasidim. He discovers ancient Biblical wisdom of startling relevance. And he wrestles with seemingly archaic rules that baffle the 21st-century brain." 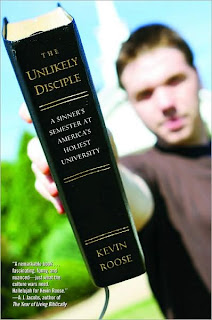 The Unlikely Disciple: A Sinner's Semester at America's Holiest University ~ by Kevin Roose, 2009


From the dust jacket:  "No drinking.  No smoking.  No cursing.  No dancing.  No R-rated movies.  Kevin Roose wasn't used to rules like these. As a sophomore at Brown University, he spent his days drinking fair-trade coffee, singing in an a cappella group, and fitting right in with Brown's free-spirited, ultra-liberal student body. But when Roose leaves his Ivy League confines to spend a semester at Liberty University, a conservative Baptist school in Lynchburg, Virginia, obedience is no longer optional.  Liberty is the late Reverend Jerry Falwell's 'Bible Boot Camp' for young evangelicals, his training ground for the next generation of America's Religious Right. Liberty's ten thousand undergraduates take courses like Evangelism 101, hear from guest speakers like Sean Hannity and Karl Rove, and follow a forty-six-page code of conduct that regulates every aspect of their social lives. Hoping to connect with his evangelical peers, Roose decides to enroll at Liberty as a new transfer student, leaping across the God Divide and chronicling his adventures in this daring report from the front lines of America's culture war.  His journey takes him from an evangelical hip-hop concert to choir practice at Falwell's legendary Thomas Road Baptist Church. He experiments with prayer, participates in a spring break mission trip to Daytona Beach (where he learns to preach the gospel to partying coeds), and pays a visit to Every Man's Battle, an on-campus support group for chronic masturbators. He meets pastors' kids, closet doubters, Christian rebels, and conducts what would be the last print interview of Rev. Falwell's life." 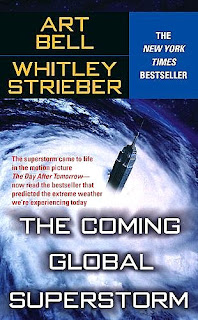 
Summary:   The authors "bring environmentalism to the masses tabloid-style in The Coming Global Superstorm, a quick look at global warming and its potentially catastrophic effects.  Like Old Testament prophets, Bell and Strieber embrace lovingly detailed depictions of global cataclysm; unlike them, our modern-day doomsayers have more to go on than that old-time religion.  Their writing is clear and straightforward, interspersing hard data with dramatization and speculation to create an engaging, enjoyable, but thoroughly spooky warning of the next Ice Age."

Library Loot is a weekly meme co-hosted by Claire from The Captive Reader and Marg from The Adventures of an Intrepid Reader that encourages bloggers to share the books they’ve checked out from the library.  Marg has the Mister Linky this week, if you'd like to share a list of the loot you brought home.
Posted by Bonnie Jacobs on 6/15/2011 06:15:00 AM
Labels: Donna, library loot

What a great mix of books. I've heard good things about "Sinner" so can't wait to see what you think of it

I picked up The Year of Living Biblically this week (so it will be on my next week's loot). I look forward to hearing what you think.