That book report I wrote 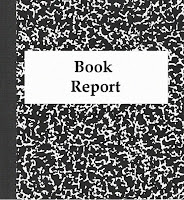 The year I was in the eighth grade, our English class had to write several book reports.  Since I always read two or three books a week, that was no problem.  But I was a smart-alecky little thing, and one week, just to see if I could pull it off, I decided to "make up" a book so successfully that the teacher would never know.

I picked up the novel I had used for my last book report, found a list of previous titles by that author, picked one, and used it for my next book report.  I made up a bunch of stuff about the book (which, of course, I had never seen), and wrote my report.  I felt rather cocky when I got an "A" on it.

The fiction that week was not in a book READ, but in a book report WRITTEN.  Maybe that's when I decided to become a writer.  My byline has been on articles and book reviews and other nonfiction that was published locally, nationally, and internationally — but my eighth grade book report was the only fiction I've ever successfully written.

This little girl seems as impertinent as I was.  I never wrote a book report on the dictionary, though it sounds like a great idea!
Posted by Bonnie Jacobs on 6/02/2011 06:02:00 AM

How cheeky you were (and how inattentive your teacher was!). :-) As a teacher I definitely caught my fair share of BS in papers, but now I wonder about the ones I didn't catch...

For what it's worth, Helen, I was an "A" student who had never before (or since) given a teacher any reason to disbelieve me. The books were from the public library, not a school library, and we weren't given a list from which to choose. So she had not likely read anything by that author, anyway.

You had me laughing with your post about your 8th grade "fiction," Bonnie.

Beth's comment is on what I posted later today, here:

I found this site practically by osmosis, and I feel you deserve only the highest of accolades for the feat accomplished. In my opinionation, you indubitably deserved the A for being so profoundly and precociously creative! Had to let you know

signed, a most impressed stranger.

Thank you, Veronica. (I looked at your blog and profile.)

I am also a writer !!I have a slightly similar story to tell . In my 10th Grade Sophomore English class we were having a test on a story in our book that I had forgotten to read . So , I just answered every question as if I were the writer !! I wrote each answer based on what I would write . And , I received an " A. "