Charles and Emma ~ by Deborah Heiligman, 2009 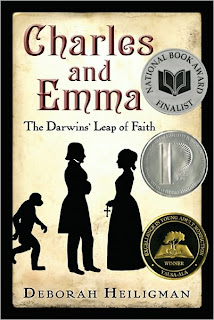 Charles and Emma: The Darwins' Leap of Faith by Deborah Heiligman (2009) fits within the guidelines for both reading challenges I'm taking part in this year.  The "leap of faith" these two people took when they married each other centered on her religion and his science.

Emma was religious, and Charles worried even before he proposed to her that his religious doubts could be a problem.  She did worry that they would not spend eternity together because, if he did not accept Christianity, he would be in hell.  Yet they continued to discuss it all their lives, while continuing their love and devotion to each other.  Here are their positions:


Charles (p. 185):  "He had already figured out that humans had a common ancestor with apes (not that people evolved from apes, as many people still misunderstand it).

Emma (p. 98):  "Not everything can be proven, Emma reasoned, but that does ot mean something that cannot be proven is wrong.  Belief comes from a different place than science."

After he died an old man, Emma edited out of his autobiography passages he had intended only for the family to read, including this one (p. 231):  "I can indeed hardly see how anyone ought to wish Christianity to bed true: for if so the plain language of the text seems to show that the men who do not believe, and this would include my Father, Brother and almost all my best friends, will be everlastingly punished.  And this is a damnable doctrine."

Yet Charles always needed her and she was always there for him (page 58):  "When he was traveling around the world on the Beagle, Charles was wretchedly seasick almost evewry day he was on board he ship.  He lived for the times he could get off the rolling, rocky seas and onto solid land.  Emma might not be passionate like his old girlfriend, Fanny Owen, was; she might not be sophisticated the way the Horner girls were, but she was brilliant and she was open-minded and she was unflappable.  She could be his solid land in the tumultuous seas of his heretical thoughts."

Emma lived from 1808 to 1896, nearly all of the nineteenth century.  The women of her day went through a lot that most women in Western culture don't have to deal with, at least not on the same scale.  Learning about the way they lived makes this book appropriate for the Women Unbound reading challenge.

When Emma got pregnant -- they had ten children -- she had the added concern that she needed to persuade Charles before they were parted by death.  Even though I was born only 44 years after Emma died, and even though the women in the generations before me passed on the fears that death was always a possibility during childbirth, I was nevertheless startled to read that Emma worried about death so young.  The death of Charles, that is.  If she should die, she wanted him to have already espoused her faith so that eventually he would join her in heaven.

She also had the added worry about her children dying.  I didn't make a note of it, but somewhere in the book I seem to remember reading that one in four or five children died.  Of their ten children, one died the year she was born, one at age ten, and one around two or three.  That was heartbreaking.

So was the loss of other loved ones.  They never knew when someone else would die, and Emma had the added worry that Charles was sick a lot.  It seemed to me that he was always sick, possibly from anxiety.  He did have panic attacks thinking of how people would react to his ideas.

I highly recommend this book.  Not only is it an award-winning book (Printz Honor Book for Excellence in Young Adult Literature, National Book Award Finalist, and winner of the ALA's Excellence in Young Adult Nonfiction), but I rate it 9 of 10, an excellent book.
Posted by Bonnie Jacobs on 4/09/2010 11:47:00 PM
Labels: book review, women unbound, world religion challenge

Great review! I've been wanting to read this one, too!