One day I took four heavy boxes of books to the used book store and came home with a mere four books.  (That's pretty good for me!)  It isn't surprising that all six books that arrived at my house this week are related to the Women Unbound challenge.  One of the books is about women AND religion, so it fits the Religions of the World Challenge as well.

The Women Who Broke All the Rules: How the Choices of a Generation Changed Our Lives ~ by Susan B. Evans and Joan P. Avis, 1999


Has chapters with titles like "I've Become the Person My Mother Hoped I'd Marry" and "I've Made Lifestyle Choices That Surprised Even Me" and "I've Grown, What's His Problem?"


Is "the only work I know of that puts the first crucial stage of the women's movement -- 1824 to 1860 -- within the complex transatlantic context required for any full or even adequate understanding." (Quoting David Brion Davis on back cover.) 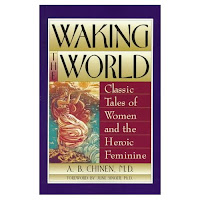 Waking the World: Classic Tales of Women and the Heroic Feminine ~ by A. B. Chinen, 1996


Forget women's passive role -- this collection of fairy tales from around the world focuses on strong, mature women.  They are so empowered that they go out and rescue the prince and change their worlds. 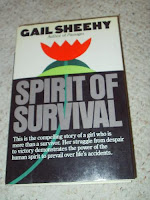 
Sheehy took in a refuge Cambodian girl and, with her, re-created her tragic past "to discover who she really was -- and what price the survivor had paid" (from the dust jacket).


These women, according to the back cover, "stand out in a long tradition of American radicals who saw the madness of oppressive institutions." 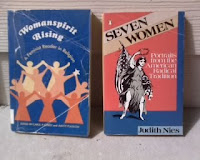 And here's the book that fits both of my reading challenges:


Tells the story of Western religion from women's perspective, concluding with "alternative traditions that ground theology and ritual primarily in women's life experiences."

These last two are so old I couldn't find images. Womanspirit Rising was only to be found in a teensy thumbnail shot. Seven Women has been revised to Nine Women; it's 25 years newer and up in price from $2.95 to $19.95 in paperback.