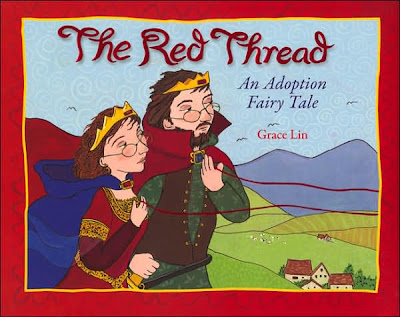 Do you see those red threads attached to the queen and king?  That's what this story is all about.  The book's summary says,


"A sad king and queen find joy and happiness after a mysterious red thread leads them to a baby waiting to be adopted."

I always read dedications at the front of books, which sometimes give me important information.  Like the one in this book:

On the page opposite the dedication is another clue to the subject of this book:


"There is an ancient Chinese belief that an invisible, unbreakable red thread connects all those who are destined to be together."

By now I don't really have to tell you the book is about the royal parents (pictured on the cover above) going on a journey to find whatever is at the other end of those red threads attached to their hearts.  You see, they woke up one morning and realized their hearts were hurting.  A peddler knew what to do.  He produced some spectacles that helped helped the queen and king see red threads looping all over the place.  They are wearing those glasses in the cover photo as they follow where the red threads lead them, over hill and dale, through villages, even tangled in a tree.  SPOILER (if you are a small child):  The strings led them to a baby!  (Oh, that was in the summary above, wasn't it?)  They hadn't realized why their hearts ached, but now they know.


"So the king and queen took the baby home to their castle, and she became the princess of the kingdom.  They never felt the pain in their hearts again.  Instead, they were filled with joy and happiness.  They never found out how the red thread had connected hem to their daughter, but they knew why.  And that was all that mattered."

But you knew that, didn't you?  And that peddler?


"The king and queen searched for the old peddler to reward him for his help.  But he had moved on to the next kingdom.  He had heard the king and queen there were suffering from a pain in their hearts."

It's a beautiful fairy tale, but my favorite pages were the first double-page spread and the last.  These were at the beginning and end of the book, framing the story of parents finding their baby.  The first page spread shows a little girl handing her mother this book.  I know it's this book because it has the exact same cover.  Both her parents are sitting on the sofa when she brings the book:

At the back of the book, all three are on the sofa.  The girl is sitting on her mommy's lap and her daddy has moved close beside them.  They are all -- now -- wearing gold crowns, helping to emphasize that the parents have brown hair and the girl has black hair.

Now for the complete title -- I give The Red Thread: An Adoption Fairy Tale by Grace Lin, author and illustrator, a rating of 9 out of 10, an excellent book.  It could become YOUR favorite story, too.
Posted by Bonnie Jacobs on 4/13/2010 11:53:00 PM
Labels: book review, women unbound