I got a half dozen new books this week.  My friend Donna took me to lunch today and gave me books, plus this big Happy Birthday cookie (yes, as you can see, I turned 70 today). 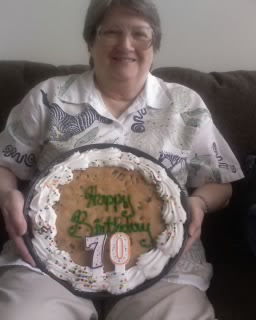 Donna also knows the kind of books I like.

The Pillars of the Earth, a novel by Ken Follett (1989), tells the story of Philip, "a devout and resourceful monk driven to build the greatest Gothic cathedral the world has known."  BN.com says, "As a new age dawns in England's twelfth century, the building of a mighty Gothic cathedral sets the stage for a story of intrigue and power, revenge and betrayal."  The back cover promises "a struggle between good and evil that will turn church against state and brother against brother."  This sounds like one for the World Religions Challenge.

Jimmy Carter's Our Endangered Values: America's Moral Crisis (2005) may also work for the World Religions Challenge.  Like in the other book Donna gave me, Carter "puts forth a passionate defense of separation of church and state, and a strong warning of where the country is heading as the lines between politics and rigid religious fundamentalism are blurred.  Many of the "moral values" he examines are under fierce debate:  preemptive war, women's rights, terrorism, civil liberties, homosexuality, abortion, the death penalty, science and religion, environmental degradation, nuclear arsenals, America's global image, fundamentalism, and the melding of religion and politics.

The next two books came from the library:

Kate Klise's novel, Trial by Journal (2001), is told through journal entries, news clippings, and letters.  The book is illustrated by the author's sister, M. Sarah Klise.  I'm curious about this one because I've never heard of a sixth grader being sequestered with a jury.  The whole thing gets "curiouser and curiouser" (as Alice would say) when I read that "twelve-year-old Lily finds herself on the jury of a murder trial while conducting her own undercover investigation of the case."  Hmm, my understanding of "sequestered" wouldn't allow that to happen, making an undercover investigation even MORE unlikely.  Still, I'm curious and willing to suspend my disbelief long enough to find out what happens.

Bare Your Soul: The Thinking Girl's Guide to Enlightenment, edited by Angela Watrous (2002), came from the library.  I've already started reading this one for the World Religions Challenge, based on this from the back cover.  It may even work for the Women Unbound reading challenge.  "Whether raised within a specific belief system or warned against all things religious, women today have been left with questions and conflicts that dating guides and pop feminism can't resolve.  This essential collection includes narratives from skeptics, reformists, and neo-traditionalists alike, representing a wide spectrum of traditions and practices -- from Buddhism to Islam, Judaism to Goddess worship, Catholicism to atheism, and many others.  Wise, compelling, and open-minded, Bare Your Soul offers a provocative look at the ways in which a new generation of women both celebrate and repudiate religion -- and, ultimately, find answers that fit."

I can't put the next book down -- it's that good.  My online book club will discuss it in May, and I posted a teaser about it yesterday.

House Rules by Jodi Picoult (2010) is a novel about Jacob Hunt, a teenage boy with Asperger's syndrome.  "He's hopeless at reading social cues or expressing himself well to others, and like many kids with AS, Jacob has a special focus on one subject -- in his case, forensic analysis.  He's always showing up at crime scenes, thanks to the police scanner he keeps in his room, and telling the cops what they need to do ... and he's usually right.  But then his town is rocked by a terrible murder and, for a change, the police come to Jacob with questions" ... and then they charge him with murder.

I'll have to explain why I call this last book a "new" one at my house.  Although I bought it in 1977 (I wrote the date in the front of the book), I never got around to reading it and it's been in a box in a storage unit for several years.  I've been sorting out old books and taking them to trade at the used book store, but when I came across this one, I set it aside to read first.

Son of Man by Robert Silverberg (1971) is science fiction, though the blurb on the back cover sounds more like what I prefer to call speculative fiction.  "In the beginning there was no Brooklyn, no St. Louis, no Shakespeare, no moon, no hunger, no death ... In the beginning the heavens, the seas, and the earth belonged to more intelligent species than a man called Clay could ever have dreamed possible in his own time ... but his own time as a man had passed, and now his time as the son of man had come!"

One of these days I will read Pillars of the Earth! I have owned it forever!

Happy Birthday! Looks like you got a good selection of books to read, looking forward to hearing your reviews on each one. And that giant cookie - sweet! Hope you had a great day!

Happy Birthday Bonnie! I hope you had a really good one and got time to read, see friends, and relax!

Wow, Bonnie! What a milestone! I never would have guessed. I hope your birthday was a happy one.
Best,
Tricia

Happy birthday Bonnie! And many new crayons in the year to come!

You have some good books to read. The Pillars of The Earth is a great one. I'm currently reading another book by Ken Follett called World Without End. Extremely engaging. First I have to finish a new fiction/medical thriller called "The Ovary Wars" by Mike Hogan. It's about our government searching for an answer to why our population is on a massive decline...bioterrorism, genetics, or something else. It's grabbed me and can't seem to put it down.

Happy Birthday and Happy Reading. I hope to look as youthful as you at 70.

Bonnie, I hope it's not too late to wish you a happy birthday! I know it was a good one because you got both a cookie (a HUGE one!) and books----two of my favorite things.

Nope, not too late -- I'll just continue to celebrate as long as I get comments. Thanks, everybody.