The Silent Boy ~ by Lois Lowry 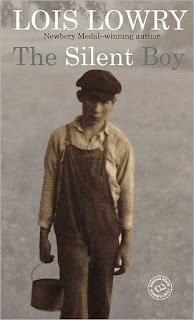 
Because Jacob can communicate with animals, Katy thinks of him as someone special, even though the townspeople say he's touched.  He doesn't speak, but he isn't a deaf-mute.  He has a special affinity to the animals, and young Katy likes him.  When she is an old lady, she needs to tell Jacob's story, even if others don't want to hear it.

Katy and her father, the doctor, have a discussion about the "irrational" things people do to make themselves feel protected (p. 134).  For Jacob, it was that hat he wears and never want to remove.  I think it's sort of like Linus's blanket or the pacifier a baby doesn't want to give up.  Jacob's hat helps him feel safe. 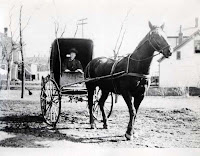 Katy has always wanted to be a doctor, like her father.  Though he tells her that not many women go to medical school, Katy is undeterred (p. 119):


Father had already explained to me that not many women became doctors, and those who did might have a hard time of it.  He had known a girl in medical school, he said, and the other students — even Father, though he was ashamed of it now — had played some cruel tricks on her, to see whether she had the stuff for medicine.  And she did.  She ignored their pranks and became a doctor.  But she never married, Father said, and never had children, which was a loss, he felt, to a woman.

I decided I could do it all, and would.  I would go to college.  Then I would become a doctor and I would marry Austin Bishop and have children one day, and maybe would travel, too.  I thought I might go to Africa and China and all the places we studied in school.

I like Katy, the protagonist — she's the main character, though she tells the story of Jacob.  She's a spunky girl, who sees the world clearly.  She notices things, which helps the reader understand even more than the little girl telling us what she sees and hears around her.  I rate the book 9 of 10.
Posted by Bonnie Jacobs on 12/26/2011 11:26:00 PM
Labels: book review

Nice to have a book you enjoyed so much near the end of the year. I am not getting any reading time since we got back from Florida, but I hope today I'll have some time while my daughter has a LONG dance session