Mind isn't confined to brain ― or even body 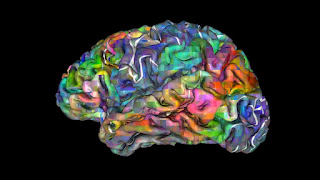 "It’s impossible to completely disentangle our subjective view of the world from our interactions."

Scott Shepard posted this link on Facebook, saying, "Fascinating blurb."  So I read the article.  I've been thinking about consciousness a lot lately, as I've read books by Michio Kaku and Robert Lanza, but my interest isn't new.  I read this book decades ago:

Cosmic Consciousness: A Study in the Evolution of the Human Mind ~ by Richard Maurice Bucke, 1900


This is a scientific study of illuminated individuals.  Bucke provides three dozen very consistent examples of "cosmic consciousness."  Some of these are the usual suspects, and others are contemporary case-histories he collected.  These enlightened figures, Bucke says, are evolutionary jumps, the predecessor of a more advanced species.

I just pulled two copies of this book from the shelves across the room; I bought a hardback edition in the 1970s and the paperback in 1985.  (I know because I wrote "bj 12/21/85" on the first page" when I was in my second year of seminary.)  While searching online for an image of the cover, I discovered there are multiple covers and that the book is now available for Kindle.  Usually it's an oversight when I buy a second copy of a book, but it costs only $2.99 for Kindle, so I bought a third version of it.  The Kindle "cover" I just got is shown on the left.

My hardback has a quote from William James on the front cover.


"I believe that you have brought this kind of consciousness 'home' to the attention of students of human nature in a way so definite and unescapable that it will be impossible henceforward to overlook or ignore it.  You are a benefactor of us all."

I've found another article about Bob Lanza, but I can't find a date on it. It does have a video, though:
https://educateinspirechange.org/science-technology/scientist-concludes-death-not-exist-just-illusion/