Irreverin says the toxic message is "women are here for men's enjoyment."  In other words, she says, the real problem is patriarchy.


"Whether they realize it or not, American men have been shaped by this kind of misogyny.  Thankfully, some men also learned some other values that more strongly influence their relationships with and treatment of women.  But left unchecked, this all-too-common assumption of entitlement leaves men filled with rage when a woman asserts her autonomy.  It makes for a world full of men who can’t cope with rejection; men who shoot up high schools to 'teach those bitches a lesson,' who force themselves on female acquaintances, or who maybe just follow a woman to a deserted place and make her suffer for their own sick pleasure."

Read Irreverin's short article:  A Border Wall Won't Protect Against Toxic Masculinity.  So how did masculinity get so toxic?

Consider these gender stereotypes, shown in "pink and blue" (of course!), which is another stereotype. 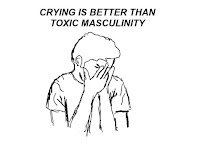 
The way our culture treats boys sickens me.  I had an 11-year-old boy in my room to have blood drawn today.  He was crying.  Not bawling or throwing a fit, just a few nervous tears.  His guardian kept telling him to 'man up' and 'stop acting like a sissy.'  Then she threatened to record him crying to show it to all his friends, which made him cry more.  I told her we had a strict no recording/photo policy, and she got mad at me for 'ruining the joke.'

When this woman went to the bathroom, I told the kid it was okay to express his emotions however he needed to, that even grown men are scared of needles, that everyone is scared of something, and he was brave for doing it even though he was scared.