A boy and his tiger — me and mine 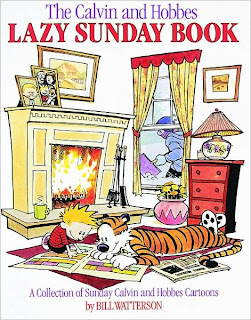 
Calvin has a tiger, a stuffed toy tiger.  Calvin also has an imagination, so his toy tiger is — for him, at least — as big and as real as a REAL tiger.  They do things together, all sorts of adventures.  I have this book, and I rate it 9 of 10, simply for Calvin's imagination.

Sometimes though, his imagination gets out of hand. Like in these cartoon panels I found online.  (Click to enlarge them.)

Calvin says, "I go to school, but I never learn what I want to know."  When his teacher asks what state he lives in, Calvin says, "Denial."  She can't argue with that.

Calvin's parents don't know what to do with his imagination.

But Calvin's got a heart.  In this panel, we see how small Hobbes is compared to Calvin's mother.  He is, after all, a stuffed toy animal. 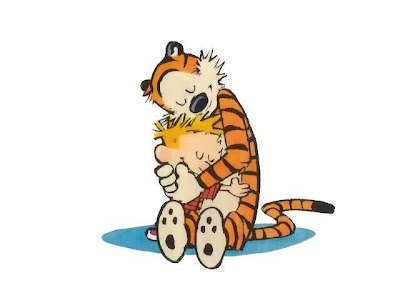 Calvin and Hobbes run and play and hug and ... hug?  Where've I heard that before?  Oh, yeah, Jane gave me a tiger to hug, and I'm trying to name that tiger. 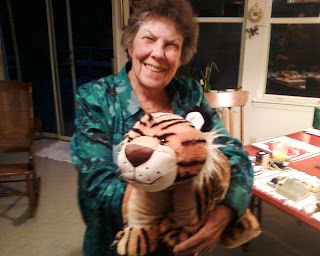 Do you think my new tiger looks like a Hobbes?

Hobbs is a fantastic name! Calvin and Hobbs used to be my favorites (along with Gary Larsen)