Here are our discussion questions about Ninth Ward by Jewell Parker Rhodes (2010, YA fiction about Louisiana).  I rated the book 9/10, which means I consider it excellent.

The leaders of this read-in posted questions this week.  I've linked to all three, so you can read the comments left on each of their blogs.  I have added my answers for the questions here. 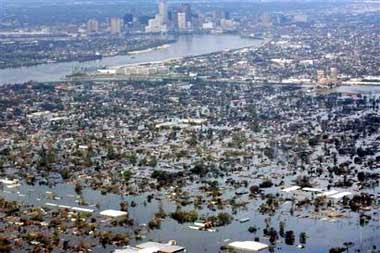 1.  The Ninth Ward is one of the newest additions to the magic realism genre.  As you read Lanesha’s story, how did you feel about the fantastical elements such as Mama Ya-Ya’s visions or the ghosts that lingered throughout the neighborhood?


Although I'm not usually a fan of magical realism, it worked in this book.

2.  This was the first book I’ve read that dealt with Hurricane Katrina and some of the issues surrounding it like Mama Ya-Ya and Lanesha being too poor to evacuate before the storm.  Have you read a book that dealt with this hurricane before?  Whether or not you have, how did the storm’s role in the book feel to you?  Could you imagine it and its aftermath as you were reading or was it vague?


Lots of people read this book to discuss it during this read-in.  "Because it’s written for children, it doesn’t go into the horrific particulars of the aftermath of the storm," said Heather @ Between the Covers, who also wrote:  "This is a great book for parents and their children to read together."  She read it with her 11-year-old daughter.  I read two books about Katrina in January:  "horrific particulars" in the novel Salvage the Bones by Jesmyn Ward were more about the dog fights than the hurricane, which was bad enough, and in Dave Egger's book about a man named Zeitoun the horrors which followed his being arrested for looting, even though he was in his own house. 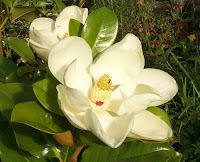 3.  Last but not least, what did you think of Lanesha?


I like that she was excited about school and new words and tied together things like math symbols and her life.  I like her imagination:  "If Mama Ya-Ya were a flower, I'm pretty sure she'd be a magnolia."

1.  Many times when I read novels, I find myself moved by its rhythms and tempo that I associate with a particular genre of music.  That being said what genre of music does Ninth Ward bring to mind?  (Sometimes it helps to visual it)


I visualized it (could see it from the descriptions), but I don't hear music while I'm reading.  I can imagine the people in this video (link left in a comment by Edi) being neighbors of Lanesha and Mama Ya-Ya.  I may have seen and heard these folks when I was in New Orleans in the late 1970s:  http://www.youtube.com/watch?v=75rZm9FPrL8


2.  The setting of New Orleans could be considered a character in its own right.  How well do you think the author developed this central piece of Ninth Ward?  Is there anything you would've changed or wanted more of?


Having read three books about the hurricane (see my answer under Vasilly's first question, above), I can picture some of what was going on during that time.  I'm sure the town has changed a lot since I was there 40-some years ago.

3.  Doret's interview with the author.


I noticed more about signs, rather than symbols.  Mama Ya-Ya saw signs in all kinds of things, like colors, which made Lanesha aware of the colors of the things around her.

2.  My grandmother was like a second mother to me.  My sister and grandmother both had 6 fingers.  I was in the NOLA train station that summer before the hurricane hit, and I’ll always remember the beautiful murals in that building.  I cannot think of a deeper way the story relates to me, thankfully my coming of age was nothing like Lanesha’s.  How does the story relate to you?


I don't relate to the story in any direct way, except as one human being feeling the pain of others.  I never saw murals in the New Orleans train station, but when I used Google to look at them, I see they've been restored.  Or maybe at least in part.

I sent a link to the book to a friend and her daughter, because her daughter lived in New Orleans for over four years recently, even during Katrina.

I loved your wrap-up/ discussion of he questions post (I read it too, but will talk about it tomorrow). I really liked the book, especially the details about what happened once everyone got serious about the hurricane coming. I wished there was a little more with the visions/ ghost seeing thing though.