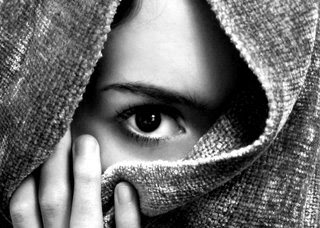 Nobody has asked me why I'm studying Genesis, but I'll tell you anyway.  This weekend, Friday the 11th and Saturday the 12th, I'll be leading a Women's Spiritual Retreat at Camp Lookout near Chattanooga.  Knowing that, you shouldn't be surprised that we will be looking at some of the interesting women of the Bible.  Here are some of the books I've been reading to refresh my thoughts about life in an early patriarchal society (list of women below).

At the bottom of that list is the quarterly study of Genesis I wrote, calling it a soap opera.  I remember a Bible study I led in Jonesboro, Georgia, in the mid-1980s.  One older woman kept saying about all the reprobates, "But he's in the Bible!" or "But she's in the Bible!"  I don't know where she got the idea that biblical people were all perfect examples for the rest of us.  Here are the women I've lined up for next weekend:

Sound interesting?  The veiled woman (at the top) is on the cover of the booklet I have prepared for the weekend.  I've titled the study:  "Unveiling Women of the Bible."  I'll review these books on Genesis later, after I lead the retreat.
Posted by Bonnie Jacobs on 3/06/2011 11:58:00 PM
Labels: books, women unbound

Sounds like an interesting retreat. Have you read The Red Tent by Anita Diamant? Wonderful book even though I am not sure how close to the Bible it sticks

Oh, yes, I love The Red Tent! It follows the Bible (with leaway for imagining that red tent, of course), but for some reason totally unrelated to any need within the novel, Anita Diamant "gave" one mother's son to another of the four mothers -- and even made him a twin! I have yet to figure out why she did it, since it wasn't necessary for the story line.

Have you read Genesis: A Living Conversation by Bill Moyers ? It was inspired by the PBS series Moyers did back in the 90's.

Yes, Maphead, I studied Genesis along with that series, back in the 1990s. I had also, by that time, written a quarterly study of Genesis myself.