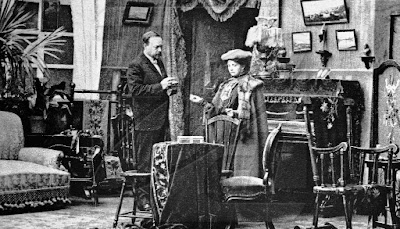 
A Doll's House is an 1879 play by Norwegian playwright Henrik Ibsen, which is now probably his most famous play. When it was first published, it was controversial because of its sharp criticism of nineteenth century marriage norms.  It is often called the first true feminist play.  I first read it when I was either newly divorced or about to be, so I was rooting for Nora all the way!


The story opens with a highway crew picking up litter on a hot California summer day. The crew, composed of several nationalities, includes Massoud Amir Behrani, a former colonel in the Iranian military under the Shah who has been unsuccessful in his four-year job search.  Running out of money, while trying to keep up appearances in order to enhance his daughter's chances of making a good marriage, he impulsively sinks his remaining funds into a house he buys at auction.  However, the house used to belong to Kathy Nicolo, a self-destructive alcoholic who wants it back. What starts out as a legal tussle soon escalates into a personal confrontation -- with dire results.

Library Loot is a weekly meme co-hosted by Claire from The Captive Reader and Marg from The Adventures of an Intrepid Reader that encourages bloggers to share the books they’ve checked out from the library.  Claire has the Mister Linky this week, if you'd like to share a list of the loot you brought home.
Posted by Bonnie Jacobs on 3/03/2011 11:57:00 PM
Labels: library loot

Oh no... a week where we greatly disagree! I couldn't stand House of Sand and Fog. But that's what's so wonderful about books: we can agree to disagree. :-)

Maybe The House of Sand and Fog seemed good because I read and discussed it in a book group. That always makes books better, it seems to me. Maybe it will be different now, with no discussion to follow. I'll let you know after I re-read it. Did you also see the movie?