Library Loot ~ plus a few reviews

Two or Three Things I Know for Sure ~ by Dorothy Allison, memoir, 1995


Dorothy Allison will speak at the Conference on Southern Literature here in Chattanooga in April, and I'd like to attend.  I've read her novel Bastard Out of Carolina, which was nominated for the 1992 National Book Award for fiction.  When my librarian mentioned Dorothy Allison's memoir Two or Three Things I Know for Sure today, I checked it out.

Sixpence House: Lost in a Town of Books ~ by Paul Collins, 2003, nonfiction (Wales)


Paul Collins and his family moved from San Francisco to Hay-on-Wye, a Welsh village with fifteen hundred inhabitants and forty bookstores.  Sixpence House is a beautiful and neglected old tumbledown pub for sale in the town's center, and he tries to buy it.  This book is "a meditation on what books means to us and how their meaning can still resonate long after they have been abandoned by their public."


"In the aftermath of the Iranian revolution, rare-gem dealer Isaac Amin is arrested, wrongly accused of being a spy. Terrified by his disappearance, his family must reconcile a new world of cruelty and chaos with the collapse of everything they have known. As Isaac navigates the terrors of prison, and his wife feverishly searches for him, his children struggle with the realization that their family may soon be forced to embark on a journey of incalculable danger." 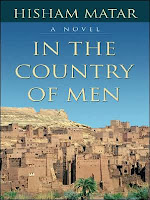 
I read about this novel, about a child confronted with the private fallout of a public nightmare, on the blog of Amy @ In Consideration of Books.  I cannot now find the route that I followed to arrive at her blog, though I presume I read about it on somebody's book blog and "found" both Amy and this book, which I am currently reading.


A young man reads his mother's e-mail and learns about her infidelity.  Helen mentioned that her book club is reading Disobedience for their next meeting, so I checked it out.  Though the writing was good, I guess I wasn't in the right mood to read about a boy spying on his mother.  Rated 7/10, a good book.

The Secret History of the Mongol Queens: How the Daughters of Genghis Khan Rescued His Empire ~ by Jack Weatherford, 2010, history (Mongolia), 8/10


I checked this book out in 2010 (read my teaser), but had only seven days because it was a new book.  I checked it out again in January, but I never got around to finishing it.  I completed it last night (hurray!) and the last part was especially worth reading.  This story of the female heirs of the Mongol Empire was lost to history, having been literally cut out of the Secret History of the Mongols.  I rate it 8/10, a very good book.

Library Loot is a weekly meme co-hosted by Claire from The Captive Reader and Marg from The Adventures of an Intrepid Reader that encourages bloggers to share the books they’ve checked out from the library.  Claire has the Mister Linky this week, if you'd like to share a list of the loot you brought home.
Posted by Bonnie Jacobs on 3/30/2011 11:35:00 PM
Labels: book review, library loot

As I said before, you've made me nervous about Disobedience. I wasn't at book club when they chose the book so we'll see how I do with it.

I bought and gave Sixpence to my grandmother (who lives in the UK) and she quite liked it. I've been to Hay-on-Wye, it's an amazing place that all bibliophiles should visit if possible!

Sixpence House and The Secret History of the Mongol Queens look good and are going on my list. Happy reading.

The Septembers of Shiraz and The Secret History of the Mongol Queens look like wonderful reads, will add them to my list. Have a wonderful week!