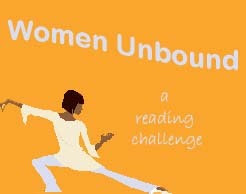 Women Unbound is a reading challenge I'm taking part in during the coming year, from now until the end of November 2010. Participants have been asked to do this meme, so here are some of my thoughts about feminism.

1. What does feminism mean to you? Does it have to do with the work sphere? The social sphere? How you dress? How you act?

Feminism is a lens through which we can evaluate women's situations in the work place, in the home, in social circumstances, in schools, in churches, in politics -- wherever we find ourselves. It involves a determination to pay attention so we can recognize when women are treated as less than fully human because women are people, too. Once upon a time, when a woman married, she and her husband became "one" and -- lest you think that is merely a very sweet metaphor -- let me explain that HE, the husband, was that person. When I was divorced in 1973, my husband had credit from paying our mortgage and other bills, and I did not. In some parts of the United States even that recently, a woman could not sell her land, even if it was inherited or bought and paid for by her, without the approval of her husband. My grandmother's generation fought for the right to vote in the United States, but I was among the women demanding equal pay for equal work and other rights some of you take for granted today.

2. Do you consider yourself a feminist? Why or why not?

Of course I'm a feminist. Every woman who lives in a patriarchal society should be, because this is still a man's world. Do I sound irate? Damn right, I am! Though we've come a long way, baby, we aren't "there" yet.

3. What do you consider the biggest obstacle women face in the world today? Has that obstacle changed over time, or does it basically remain the same?

Too many obstacles to list in a single blog post, but one that especially gets to me is in the field of religion. Fundamentalist protestant churches and the Roman Catholic Church won't ordain women, for example, even though the first persons sent to tell the good news were women (see Matthew 28:5-7, Luke 24:1-11, and John 20:17-18). The "good book" of Christianity is frequently interpreted in ways detrimental to women, like blaming Eve for bringing sin into the world even though she wasn't even there when Adam was commanded not to eat of the tree in the middle of the garden. (Don't believe me? Read Genesis 2:15-23 and see that God made her after the prohibition to Adam.) Muslim fundamentalists like the Taliban severely punish or even kill a woman if a man disapproves of what she's wearing. I could give more examples, but we need a laugh so I'll just leave you with this cartoon (which, on second thought, I see isn't really funny).

Great post! Have you decided what books you want to read for the challenge?

I have a link to my earlier post at the bottom of this one:
http://bonniesbooks.blogspot.com/2009/11/women-unbound.html

That's where I have my list of eight books and why I chose them.

Wow, great post! Very thought-provoking. You leave me with a lot to think about :-)

Thanks so much for participating!

Fantastic answers, Bonnie...I totally agree! Thanks for mentioning the religion thing...it is one of my pet peeves. I was raised in a pretty liberal Methodist church where women could be ministers, so when I moved out west and encountered mostly fundamentalist Christian churches in my area, it was a shock. In most churches around here, women are not allowed to even be elders in the church, much less pastors. It infuriates me!

Yeah!
Bonnie - I am so happy I will get to be part of this challenge with you... you know the most practical problems associated with the war against the label and the ideal itself. :)

My post essentially said the same things except not as well as yours.
Shellie
Now I'm off to look for your books list... :)

Love your answers, Bonnie! Lots to think about!
Myrthe

Great post Bonnie. Have you read Dance of the Dissident Daughter by Sue Monk Kidd. Remind me that we need to talk about her...

Sorry, Amy, that I'm just now replying to your comment HERE. Yes, I've read Dance of the Dissident Daughter by Sue Monk Kidd and consider it one of the best books on the subject. Yes, we need to talk about her and about the book. Here are the posts where I used the word "dissident" (most mention this book):