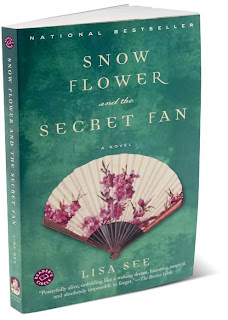 "Even now, after all these years, it is difficult for me to think about Mama and what I realized on that day. I saw so clearly that I was inconsequential to her. I was a third child, a second worthless girl, too little to waste time on until it looked like I would survive my milk years. She looked at me the way all mothers look at their daughters—as a temporary visitor who was another mouth to feed and a body to dress until I went to my husband’s home. I was five, old enough to know I didn’t deserve her attention..." (p. 12).

This novel set in ancient China may seem remote to our western way of thinking, but we aren't really so different.  The excruciating pain of foot binding to make women's feet small and somehow appealing to men is not really that different from wearing pointy-toed shoes with high heels that distort the bones in a woman's feet, making them grow crooked, and tilt her spine in a way that men may consider sexy, but sets up a woman for back trouble in later years. I quit wearing high heeled shoes many years ago.

I was delighted to learn that women figured out a way, in their isolation from each other, to communicate even without email or telephones.  They made up their own women's writing, nu shu, that men were unable to read, and kept in touch by exchanging a silk fan with their secret messages painted on it.  However different the lives of Lily and Snow Flower may seem to me, my friends and I sometimes have misunderstandings that spoil our friendships, just like women of that age.  Having the freedom to visit or pick up a phone or email a friend to set things straight doesn't mean it will happen.  It's easy to busy ourselves with superficial contacts on Facebook or Twitter and use that as an excuse to avoid the hard work of making deep friendships by keeping up with a few friends face to face.

Lily was haunted by memories of who she once was -- and of a person, long gone, who defined her very life.  And so, with time on her hands, she recounts the story of Snow Flower.  Lily feels remorse, but is it too late for forgiveness?

Great review, Bonnie. I read this book a few years ago and liked it very much, though I do remember finding it very painful to read the details of foot binding because her descriptions were so vivid.

Great review! This is one of my all time favorite books! I read it when it first came out and still can vividly picture some of the incredible scenes in the book. Foot binding was a mystery to me before reading this book and I am still amazed that it was actually practiced.

"It's easy to busy ourselves with superficial contacts on Facebook or Twitter and use that as an excuse to avoid the hard work of making deep friendships by keeping up with a few friends face to face."

Relationships are work. Thanks for the review. Enjoyed it very much.

Great review! I did this one as an audiobook and so sometimes fast-forwarded the foot binding scenes. I didn't love it, but it was definitely interesting.

Good points! Though foot mutilation and several other events in this book seems like foreign concept, you really can find correlations between our world and theirs. Sounds like a neat story!

Great comparison with the high heel shoes :). I just read and reviewed this book for the Women Unbound too. Perfect book for the challenge!
My review here

Mee, I like how your review of the book has links to other reviews (like this one), saying which of us did and didn't like the book. Also, thanks for sharing the link to "Nu Shu: A Hidden Language of Women in China" that's found here:
http://www.wmm.com/filmcatalog/pages/c473.shtml

Thank you for stopping by my blog. :)

I'm glad you enjoyed Snow Flower as much as I did. Although the foot-binding parts are painful to read, it's also, I think, very true to life. I loved the idea of the "old sames" in Snow Flower (contrast that to Facebook or Twitter friends!).