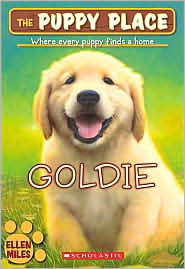 Goldie by Ellen Miles, first in a series of six Puppy Place books, is a wonderful book to read aloud. Kelly told us that the aim of the Four-legged friends challenge is to honor our pets (even if they don't have four legs), and length doesn't matter ... reading a picture book of Bambi to your grandchild counts. I had Kelly's challenge on my mind recently when I went to lunch with my granddaughter and her second-grade class. With six older grandchildren, I know Grandparents Day means it's book fair time. I was thinking, here's my chance to buy a book about an animal and let Cady read it to me. Nah! This is a seven-year-old who knows what she wants.

Her mother had already sent money to school so she could buy a few books earlier in the week, but there was still one more she really, really wanted. The catch is that I was supposed to buy only one book, one. Yeah, but the one she wanted wasn't about an animal. Did I hesitate? No, I set Cady the task of finding a story about animals. "How about one on hamsters?" I suggested, thinking of Herman (see below). No hamster books to be found, but we did find one slightly below her reading level about a golden dog. I assured my granddaughter that I would tell her mother we HAD to buy that book because ... Goldie was her mother's paternal grandmother's name. Ah, yes, my daughter gave me a raised eyebrow at that sorry excuse for buying a book ... like I really need an excuse! That weekend I went to Cady's house, she read me a couple of chapters and, while she was getting ready for bed, I finished Goldie on my own so I could review it here.

Summary
Charles and Lizzie Peterson love puppies and want one of their own more than just about anything. Their mom, who doesn't think they are ready for a puppy, promises them that someday they'll have a new puppy "when the time is right." When their dad brings home a golden retriever puppy, they have a chance to foster a puppy and show their skeptical mother that they are truly ready for a dog of their own. Goldie's thoughts and feelings are included in italicized print throughout the story. Based on how well things worked out with Goldie, the family decides to foster another puppy that the children may get to keep. The realities of dog care — from housebreaking to socialization — are woven into the ten short chapters of this book. This is perfect for every child who wants a dog and every parent who thinks the time is not right. It's a story about responsibility, with puppy care tips at the end.

Kailana's last rule for the Four-legged friends challenge is to tell something about our pets in our introductory post. I have had a number of pets ... turtles, puppies, fish, kitties, salamander, and a hamster named Herman, for example ... but the ones I have bonded with have mostly been cats. So in my introductory post I wrote about Duchess, the cat who waited to walk me home on school days. This time I want to tell you about Herman.

It's been too long for me to remember the details about how and why we got a golden hamster, but I do remember Herman. He wiggled and squirmed and turned in our hands so much that one of my children said, "Herman, the Squirmin' German!" All three roared with laughter, and that strange moniker became his name. Since I was the one who spent the most time with him -- feeding him, cleaning his cage, giving him water, and trying to find him when he escaped -- he became plain ole Herman to me. Herman had a small wire cage with a rattling metal wheel that he would run in, frantically, rapidly, daily, hourly it seemed. The bottom of his cage was covered with cedar shavings, under which a hamster could sleep all covered and snug. 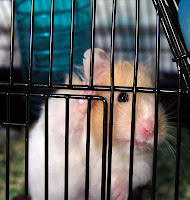 I don't have any photos of Herman, but this one from Wikipedia looks a lot like him. He was a smart little fellow who knew if he tried long enough and hard enough, he could open the door of his cage. He would wiggle and squirm and chew and bite: ch-ch-ch-ch-ch-chunk, ch-ch-ch-ch-chatter, ch-ch-ch-ch-ch-chuck-chunk. And POP after awhile that door would open! He especially liked the corner behind the four-drawer file cabinet, though I can't imagine how he knew it was heavy and hard to move. Poke along the side with a broom handle, and he'd run behind. Poke behind the file cabinet, and he'd run to the side. Poke and prod long enough and Herman would make a mad dash to the sofa and climb inside from underneath. He had probably made the hole in the cloth as his escape hatch. Sometimes we could see him moving along inside the material, safe from us humans who really did NOT want to cut up the sofa and make him run for the other end. Eventually he would emerge, hours or days later, and someone would grab him. Sometimes he would choose to run around the cushions, and all it would take to catch him was a still hand waiting along his path. Soon he would dash right into the hand and be caught. And poor ole Herman went back to work: ch-ch-ch-ch-chuck-chunk, ch-ch-ch-ch-ch-chu-chuck, ch-ch-chat-ch-ch-ch-thunk-ch-ch.

We had Herman during the time I was deciding whether I really wanted a divorce, a time when I often felt frustrated and overwhelmed. There came a day when I was sitting in the kitchen floor, leaned back against the cabinets, with one of the children saying something like, "It'll be okay, Mom." I was thinking about a husband, not a hamster, but I heard a suspicious sound: scritch-scratch-skitch. I shushed my child and said, "Listen!" Scratch-skritch-scrunch-scratch. Slowly, quietly, I leaned toward the corner cabinets and the sound was even plainer. Scritch-scratch. Uh-huh, in case you were wondering, Herman had been AWOL from his cage for several days. Scritchity-scritch-scratch.

I felt under the edge of the cabinet doors. A hole! There was an unseen opening in the corner where the cabinet makers had not entirely made everything fit together; after all, who would ever know, right? Who is likely to get down in the corner under a three- to four-inch toe-inset to check? A six-inch hamster, that's who! Slowly I opened the corner cabinet and reached around to discover a space between the dishwasher and the cabinet shelves. And there was Herman, who had happily settled in by bringing shreds of this and that to furnish his new home.

For an animal I never bonded with, Herman and I have a lot of history together. One night I was sitting in the den after everyone else had gone to bed. As usual Herman was fighting his cage door: ch-ch-chuck-ch-ch-ch-chunk-thunk. I was about as down as I'd been that summer, knowing that I had to leave that marriage, and there's that hamster, chewing like crazy on his cage door. Finally, I said softly to him, "What's your problem, Herman? We feed you, we exercise you, we give you plenty of water and sawdust and everything else you need. Why are you fighting so hard to get out?"

He kept trying to escape, ch-ch-chewing, ch-ch-ch-ch-chucking. And suddenly it hit me. Yes, it sounds like a cliche, but I was struck by the thought: We are just alike! I, too, have food and clothes and everything I need. I, too, am unhappy in my cage. Herman, I understand. I took him out of his cage and held him, though he still wanted to get away to some place nice, like that little cubbyhole in the kitchen.

Herman didn't have the option of divorcing me or leaving town or leaving his cage, for that matter. But I got him a big glass aquarium filled with cedar chips and more space to run. Umm, it didn't have a door, and the top had to be covered, but Herman had more room. And he never, ever (as far as I know) experienced anything like this:

A lovely post, Bonnie, touched my heart in two ways. One, I used to have two golden retrievers, the very best friends in the world. And two, we used to have seven (yes, seven) Siberian dwarf hamsters who all lived in aquariums (yes, seven aquariums) who provided us with much laughter and delight. :-)