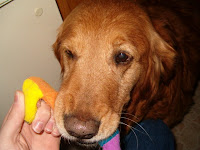 The Four-Legged Friends reading challenge is in memory of Sandy, Kailana's best friend of 12 years, who recently died. That's Sandy in the photo. Kailana brought Sandy home on September 20th, so we have a short lead time, but five months to complete the challenge. Read books that have an animal as the main character or an animal who plays an important enough role that you remember it afterwards. They do not have to believable, but the animals do have to be real, as in, no dragons. Kailana counts The Guardian by Nicholas Sparks, for example, because the dog in it makes the book one of her favorites. The aim is to honor our pets (even if they don't have four legs), and length doesn't matter ... reading a picture book of Bambi to your child or grandchild counts. The most outrageously fascinating thing Kailana added to her "rules" was this:


My suggested food while you are reading? Baby carrots. I used to munch on carrots and never really think to give them to Sandy, but she loves them! So, baby carrots turned into half the bag for me and the other half for her. Actually, that's what I did with her for her last night. I ate carrots with her. She did not eat a lot, but I think baby carrots will always remind me of her.

Her last "rule" is that we tell something about our pets in our introductory post. I have had a number of pets ... turtles, puppies, fish, kitties, salamander, and a hamster named Herman, for example ... but the ones I have bonded with have mostly been cats.

When I was nine years old, a neighborhood boy and I were splashing in rainy puddles when a bedraggled kitten found us. My mother said it looked like a drowned rat (well, mouse ... the kitten was very small), and Micky's mother wouldn't let him bring it into their house. After due consideration, Mother decided to let me keep the kitten. I named her Duchess, and she slipped right into our family like she had always belonged there and grew to be very regal indeed, a beautiful soft gray cat with white paws and a white spot below her chin that moved like a dog's tag when she walked. Duchess had her first litter of kittens in my drawer on top of my socks and underwear; it must have been the softest place available to her at the time. When I was in high school, we rode the regular city buses to school and home again in the afternoon, yet Duchess was always at the bus stop to meet me. How did she know which of the buses that ran every 20-30 minutes all day would be the one I rode? I don't know, but her internal clock was set and there she was, waiting to walk home with me. One part of this challenge is dedicated to the memory of Duchess.

Hmm, I was going to tell you about Duchess, Pippa, Jack, and Kiki in this post. But I think I'll tell you about the others when I post my book reviews. Since I'm about to finish a book about a dog named Merle and one about a gentleman cat, I already have two books for my list.

So glad that you are joining in! I look forward to hearing about all of your pets. Everyone I know thinks it is funny Sandy ate carrots, although I do know a few other animals that do so as well, so I thought it was a fitting addition. :)

Just some proofreading, if you will. Sandy was only 12, not 16. I wish she had lived to be 16! And, September 20th is the day I brought her home for the first time, her birthday was in August.

Sorry, Kail, I guess I read too fast and didn't proofread. I've corrected my mistakes. Thanks.

I love reading about everyone's pets! Animals have been such a big part of my life and now the lives of my kids. I really feel sorry for people that DON'T have them. I would love to have a few cats in the house. But Mike is allergic, so for now, I have to settle for dogs.

Have you read Marley & Me? It was such a good, heartwarming book!! I just can't recommend it enough.

You are right about the Oprah site! I have tried a few times, and just can't seem to find what I'm looking for. From the perspective of the Classics Club, the entire group was disappointed to find that all the past discussions had been lost. That's over 3 years of books!! Such a disappointment. I'm off to check out the Book Buddies blog. Is there a big orange cat waving her tail???

Have you read Marley and Me - all about a man and his dog. Delightful read. I generally avoid animal books, they always make me cry.

I third the recommendation on Marley and Me.

I loved reading about Duchess...just had me smiling the whole way through!