Booklogged also saw Quebec City. This picture of how steep the area is helps me picture what Willa Cather wrote about. You can enlarge the photo by clicking on it. 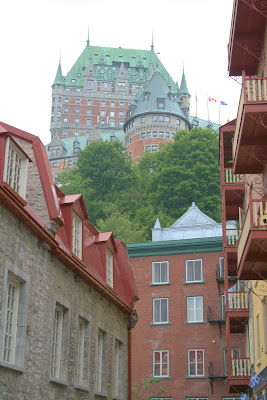 See my review of Shadows on the Rock posted Wednesday. Here's what Booklogged said about Quebec:

We arrived in Quebec City at around 3:30 PM. This afforded us time to a take a bus tour of the city. ... Perched strategically high above the St. Lawrence, Quebec is the only walled city remaining in North America. The Citadel, well designed to defend the city, and the walls surrounding the city are well maintained. All of the buildings within the walls are old and full of history and character. The streets inside are narrow and winding and seem very European. ... Beneath the walls on the St. Lawrence side is the old lower city. It has been largely reconstructed around a few old buildings that are nearly 400 years old. ... The streets are open only to pedestrians.

Ha! She also wrote of the province of Quebec: "This end of Quebec is entirely French speaking. We found few who could even get by in a little bit of English." Yep, I'd have a hard time there!
Posted by Bonnie Jacobs on 8/05/2007 01:00:00 AM
Labels: book review

However, Quebec is one of those places I have little desire to see.

Wow, it's beautiful. I wanted to go to Quebec, when we lived in Michigan. Hubby said, "No. Too far." We went camping, instead. It was fun. I have lots of painful memories of aching arms after rowing against the wind in Algonquin Park and zipping three mosquitoes into the tent with us, waking up with bites on all my exposed bits.

Love this photo! I really wish I could be there to see it in person. :)

I'm stopping by to let you know, I’m hosting my second Pay It Forward Book Exchange giveaway. There are 7 other book giveaways linked up thus far in my post too, so there are lots of opportunities to win! Stop by for more details!

Yikes! That is steep! But so beautiful.

Oh, Bonnie, how sweet you are to post a couple pictures and to follow our trip. Quebec was our favorite big city. We couldn't believe how deftly they handled the crowds of people that seemed to be everywhere and yet, we never seemed to fell crowded or harassed. There were so many festive sidewalk cafes, street corner entertainers, interesting sites, and cute little shops.

I started reading Shadows on the Rock at some point on the trip, but did not finish before arriving in Quebec City. I had read enough, though, to tingle as I visited different places mentioned in the book. To see Frontenac's chateau and the little shops of old Quebec was a real treat, as well as the church and seminary of Bishop Laval. It was a totally awesome experience to read a book and see the actual setting.