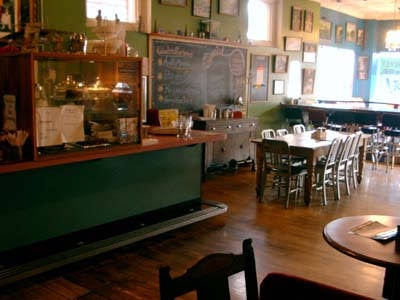 Okay, let me explain that first line. Yesterday I met Susan of Patchwork Reflections. Once hesitant about meeting a stranger from the Internet, she did it with aplomb, SHE being the cool one and I the one nattering away nervously, all because I was (inadvertantly) late. I finally get to meet her and I'm late!!?? Sheesh! (Muttering to myself: She comes early and I'm late!)

Ever the consummate blogger, Susan did arrive early, with camera, and photographed the bridge she wrote about this morning. Since she, having been there way too long, had probably read all 40,000 or so titles on the bookshelves, we left 'A Novel Idea' bookstore where we met and made our (circuitous) way down the stairs from Frazier Avenue to the area of the Carousel in Coolidge Park. It was hot under the sun, as we slipped under the bridge toward the little shops looking for something cool to drink. Two small places 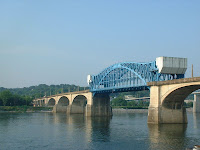 were closed or closing, even though it was only late afternoon, so we moseyed in the back door of the Mudpie, a trendy little cafe on the corner of Frazier and the Market Street Bridge. (At 103F moseying was as fast as we felt like walking.) This bridge is the one which recently reopened after repairs, not the walking bridge Susan photographed.

Into the Mudpie and into the cool air conditioning ... and on with the conversation. Let me tell you, Susan is far too young to be a grandmother! She was wearing a blogger tee-shirt that said something to the effect that ... and this is NOT a quote ... "Everything you say and do is fodder for my blog." I wore my Oprah's Book Club tee, so there we were, two bloggers sitting in the wide-windowed corner of the Mudpie Coffeehouse and Restaurant ... see our corner in the photo? We talked about everything and nothing, the best sort of thing to blog about!

Next time ... yes, of course there will be a next time! ... next time we may drive up the W Road and look around the Signal Mountain area, including Signal Point where she's been before. See the hairpin turn? Now THAT will be something to blog about!
Posted by Bonnie Jacobs on 8/16/2007 07:25:00 AM

Well done, Bonnie, I couldn't remember the name of the little watering hole where we cooled off!

Before I knew you were running late, I asked another lady in the bookstore if her name was Bonnie - as she was just sort of milling around like me!

The bookstore and shops on Frazier Avenue are worth another visit, maybe it will cool off soon. And maybe I can get my DH to walk across the bridge with me toward the Hunter museum (I can see him rolling his eyes now!)

Thanks for the mini-tour! Try to stay cool in this record heat wave.

How exciting! Have you met an internet friend before? I've met about 15, but I still get nervous.

What fun! Bonnie, are all those cat photographs yours? They're so cute! I love your new header . . . again!

Dewey,
Yes, I've met lots of internet friends ... I've had some overnight at my house and stayed at theirs, having known some of them since the late-90s. I went into the bookstore business with Donna, whom I had met in an online book discussion group. No, meeting online friends doesn't bother me at all.

Bookfool,
No, I googled these cats. If you are just now finding the cats all over my blog, you have missed several that I've deleted or taken back OUT of posts where they "wandered" in.

Susan,
Since I don't really look much like my icon, were you surprised when you actually met me? That's the question most people ask me when they talk about meeting online friends.

Yeah for you Bonnie!! Speaking as one of those you have actually met, it was truly an honor! You and Donna Rock!!

Dewey mentioned "axe murderers" and that DOES seem to be what many people think. Nine years ago in August when I met Donna, we had already been friends for a couple of years online. Donna arrived in Chattanooga and stayed overnight at my house, and we left the next day to drive north to meet three friends we had never seen: Nancy in Virginia, Meg outside DC, and Maggie in Maryland. All of us were strangers to each other, but they took us into their homes ... TWO strangers!

Now my point ... Donna and I spent a good part of our travel time making up a story about an axe murderer, putting every single one of our online book buddies into the story. Donna, an English teacher turned librarian, became BookLady, a character who read the trashiest romance novels. My character was Rev. Geneva, who appeared to be a goody-two-shoes.

We were being followed by a man one of us was involved with, a man who was very afraid of strangers met online. When the man saw us pull off the road and get out of the car with one of us holding ... gasp! ... an axe, he pulled up behind our car, sprang into action, shoved the two apart, and wrestled the axe away from the would-be murderer. The other woman fell and hit her head on a rock. She wound up in a coma, in the hospital and totally unaware for most of the novel.

This was the background story, which covered the trial for attempted murder. The novel itself was told through documents, like emails and IMs and newspaper articles about the case.

The name of our book was to be Happenstance. Our book buddies, who knew they would be frantically emailing back and forth in the book, encouraged us to write it and get it published. We didn't, of course, and Donna and I never did decide which one of us (I mean, which of our characters) was to be the bad guy. I still have our notes, somewhere.

Now tell me the truth, how many of you would buy our book? What if we lower the price? LOLOL.

I've been watching your cats change for a while, now. I wondered, in part, because there's been such a wide variety of kitty colors. I do have a friend who is owned by 28 cats. :)

Bookfool, I have only one cat and she isn't any of these who have visited my blog. One of these days I'll read the instructions on my camera and put up MY pictures, including one of myself.

That cafe looks nearly identical to the one in Marshall NC near where my son lives.

I've met several bloggers in person. I love it like I love going to my high school class reunions.

lol @ your meeting an online friend and making up a story about an axe murderer while you traveled with her.

I'm catching up here after a hectic few weeks with not so much internet time. The same friend is still having problems with her ex as well as the book club message board switch earlier in the week.

I referred to this post today in a comment to my online Book Buddies, which includes "my old friend" Susan:
http://bookbuddies3.blogspot.com/2010/10/october-tree-grows-in-brooklyn-1942.html

I haven't read this one in years, but I still like Susan's tee-shirt that said something like "Everything you say and do is fodder for my blog." Since then, my friend Donna ran across another tee-shirt and got it for me: "Careful, or you'll end up in my novel." I wore it just yesterday!

Nifty story. I haven't met any of my online friends live yet. I hadn't even thought of the potential risk of there being an axe muderer among us.

The "axe murderer" thing was going around fifteen years ago, when people were afraid to use their real names online. I've always used my full name, maybe because I'm too trusting? Anyway, after blogging with people for years, I think we get to know them. So far, the people I've met "in real life" and face to face have been exactly what I expected, based on our online acquaintance. Shirley, I hope you and Susan meet some day and share quilting stories.