The Tea Rose ~ by Jennifer Donnelly

Note to all who have read The Tea Rose by Jennifer Donnelly:

Do you remember in the book that Paddy (the father) had to grow up without a mother because the priest insisted the baby must be born and live long enough to be baptized? In this case it meant, yes, the baby was born live and, yes, it was baptized before it died maybe an hour later. But in the process they lost the mother. Aaarrrrrgggghhhhhh! This has always frustrated me no end. Do you know how long this edict lasted? Until now. More than 14 centuries!

Yesterday ... YESTERDAY ... newspaper articles appeared saying, "Pope Benedict XVI has reversed centuries of traditional Roman Catholic teaching on limbo, approving a Vatican report released Friday that says there were 'serious' grounds to hope that children who die without being baptized can go to heaven." 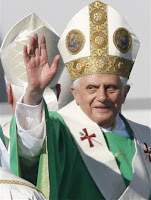 This whole thing started with "Saint" Augustine (354–430 CE) in the 4th century. He's the one who said we are all born in sin (we are all naturally evil, if you like) and must therefore be baptized to wash away the stain of sin. The Rev. Richard McBrien, professor of theology at the University of Notre Dame, said, "If there's no limbo and we're not going to revert to St. Augustine's teaching that unbaptized infants go to hell, we're left with only one option, namely, that everyone is born in the state of grace." Do you know what that means? That we are born sinless. McBrien goes on to say, "Baptism does not exist to wipe away the 'stain' of original sin, but to initiate one into the Church."

Thank God that this odious teaching has been laid aside! How many thousands of women have died and how many children like Paddy orphaned because of Augustine's theology? We don't want to know. St. Augustine is the one who also thought sex was so sinful that he didn't choose to marry the woman who bore him a son. Will the Roman Catholic Church someday quit requiring celibacy of their priests? Yes, I'm sure of it, partly because they are running out of priests willing to take that vow. That may eventually lead to the ordination of women too, but don't hold your breath.
Posted by Bonnie Jacobs on 4/21/2007 10:16:00 PM
Labels: book review

I'm Catholic, but I joined the church after I got married. And I became Catholic because I loved THE CHURCH I was attending and the Priest that is there. I like the structure of the church and the mass. But there are a lot of things I disagree with about Catholocism as a whole...this being one of them.

I'm sorry, but I know in my heart that every child that is not baptized is not going to suffer eternal damnation. And God I choose to believe in wouldn't be that cruel!

Well put, Stephanie! If the Christian God is a god of love, then God would NEVER be as cruel as the men in church leadership have been.

Bonnie, Thanks for posting the latest reversal of Roman Catholic teachings dealing with the issues you have pointed out.

This is monumental. The Pope has so many followers that merely a statement from him can change millions of people in their way of thinking.

In my own way of thinking God is the same now as he has always been. He does not change with any new doctrine that manifests its claim in the name of religion.

I have never thought it possible for God to let unbaptized babies remain in a state of limbo. Not my God.

Now it looks like there will be a few more people agreeing about this and lives will be changed for the better. Lynne