Well, I've done it ... joined my first challenge. Something About Me involves choosing five books that say something about me. Then during August-September-October-November, we'll read some of the books. How many is up to each person. In other words, if you read my books, you'll know me a little better. I've (tentatively) chosen five books, which should be posted on the site in a day or two. Lisa at Breaking the Fourth Wall came up with this great idea. Click HERE or on the picture to check out the challenge and consider joining us. It sounds like fun!

Here are five good books that say "something about me":

1. Evensong ~ by Gail Godwin ~ This novel's main character is the church's first woman pastor. She's Episcopalian and I'm not, but some of her experiences are like mine when I was ordained and went into a field where I was often the first woman churches had ever had in their pulpits. Rated 10/10.

2. On Tap ~ by J. Frances Alexander ~ Chattanooga, my hometown, is the setting for this novel about the vulnerability of America's supply of safe drinking water to the attack of terrorists. Can you tell I'm also interested in environmental issues? Rated 8/10. 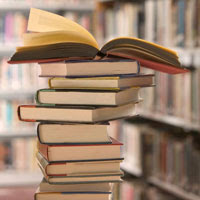 3. Booked to Die ~ by John Dunning ~ A mystery involving bookstores that deal with rare and out-of-print books, this book was a learning experience for me when, after retirement, I worked for such a store. Later I was bookstore manager at a store in a small town south of Chattanooga, before opening my own bookstore. In none of these situations was there a bookstore murder to solve as in this book of fiction! Rated 9/10.

4. Go Out in Joy! ~ by Nina Hermann Donnelley ~ The author shares what it's like to work as a hospital chaplain. I first read this book while in seminary, when I too was struggling to learn how to deal with patients and their relatives, especially when parents were fearful for the health of their small children. My group of intern chaplains was assigned to a large hospital in Atlanta, and I prayed I would not get the pediatric ward. You did notice the word "children" above, right? Rated 10/10.

5. The Dance of the Dissident Daughter ~ by Sue Monk Kidd ~ This nonfiction book chronicles Kidd's religious awakening and transformation. Although we have arrived at somewhat different places, we both had to work through the patriarchy in our religious traditions. "Awakening" is a great word for what I felt when I reached a point in my life when I could articulate what I believed and why. Rated 10/10.
Posted by Bonnie Jacobs on 4/17/2007 12:30:00 AM
Labels: book review, books, challenge

I read John Dunning's Booked to Die several years ago. I don't remember much about the mystery, but the education in the book trade was fantastic. I wonder now where one of these stores is located, as I have never been to one. You mentioned a store in a small town south of Chattanooga, is this store still there (as I am just south of Chattanooga at this point in time).

Sorry, Susan, I somehow overlooked your comment. No, the store where I used to work in Trenton, Georgia, is no longer in business. However, the very BEST bookstore in Chattanooga for rare and out-of-print books is A Novel Idea at 38 Frazier Avenue on the North Shore. Karen, the owner, recommended John Dunning's Booked to Die and, when I asked, said this IS the sort of thing she does, going out to evaulate books and make an offer on them. I'll post this response on your blog as well, so you can check out this great little shop. Tell Karen I sent you!