The Princess of Black Poetry

Professor Nikki Giovanni stood before the students and faculty of Virginia Tech during a memorial service for those slain during Monday's massacre. The 63-year-old poet with the close-cropped hair is a University Distinguished Professor at VT and has been on the faculty since 1987, teaching English. Have you ever heard of her?

Nikki Giovanni is a world-renowned poet, writer, commentator, activist, and educator. Over the past thirty years, her outspokenness, in her writing and in lectures, has brought the eyes of the world upon her. One of the most widely-read American poets, she prides herself on being "a Black American, a daughter, a mother, a professor of English." Early in her career she was dubbed the "Princess of Black Poetry," and over the course of more than three decades of publishing and lecturing she has come to be called both a "National Treasure" and, most recently, one of Oprah Winfrey's twenty-five "Living Legends." 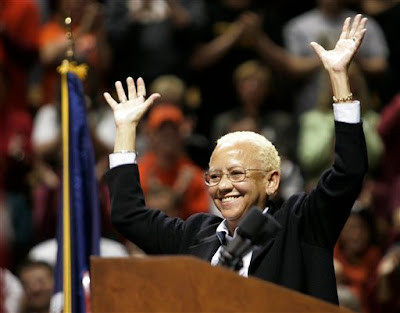 Her bio goes on to say that her book Blues: For All the Changes reached #4 on the Los Angeles Times Bestseller list, a rare achievement for a book of poems. Most recently, her children's picture book Rosa, about the civil rights legend Rosa Parks, became a Caldecott Honors Book, and Bryan Collier, the illustrator, was given the Coretta Scott King award for best illustration. Rosa also reached #3 on The New York Times Bestseller list.

if i can't have
what i want . . . then
my job is to want
what i've got
and be satisfied
that at least there
is something more to want

since i can't go
where i need
to go . . . then i must . . . go
where the signs point
through always understanding
parallel movement
isn't lateral

when i can't express
what i really feel
i practice feeling
what i can express
and none of it is equal
i know
but that's why mankind
alone among the animals
learns to cry
Posted by Bonnie Jacobs on 4/18/2007 10:55:00 PM
Labels: poetry

Hadn't heard of her. Thanks for profiling her.