Worlds in Collision ~ by Immanuel Velikovsky 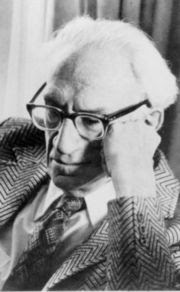 The author, shown at right about 1974, was vilified by the scientific community for publishing this book on planetary theory. Velikovsky was a scientist who also knew a lot about history and mythology. The outpouring of scorn and abuse seems far out of line if his theories are really so impossible to believe. The book is out of print and Velikovsky died years ago, yet the controversy lives on. (Yes, you can read all about it in Wikipedia.)

People familiar with the book of Joshua in the Bible probably have heard about the day that the sun stood still in the sky. With that extra long day, Joshua was able to defeat the people he was fighting. The Israelites therefore saw that "wonder" as help from God. Velikovsky found that other peoples around the world also report an extended day or, on the opposite side of the world, an extended night. Happenstance? He didn't think so.

Venus, the planet we know as the morning star and also the evening star, was for some reason worshiped by many different people. He wanted to know why. Velikovsky found evidence to show that Venus "did battle" in the sky, frightening people all around the earth. Using descriptions from numerous ancient manuscripts, the author shows that the earth once had only 360 days, meaning it was in a slightly different orbit. Venus changed that, Velikovsky says. According to his theory, Venus was once a comet, expelled from Jupiter, and had a comet's tail which whipped the earth.

Even more interesting is the "fight" between Venus and Mars. Recently, I ran across a theory about our "electric universe," which says the planets have charges. Without calling it that, Velikovsky (in the 1940s) wrote that Venus and Mars shot off sparks (my words) when they came into close proximity. Earth got in the way of their "fight" and was bumped out of its orbit, but only slightly. The poles flipped and after that the sun "came up" from the wrong direction. That extended day mentioned above happened when the earth changed its position as well as its orbit.

Velikovsky's theory makes sense to me. This book was as much fun to read this second time as when I read it before, and I rate it 9/10.

"Gravity can only attract, but the electric force can also repulse. ... The Electric Universe is fantastical beautiful in its elegant simplicity, already in its first description. However, the 20th century remains for ever the century of astronomical mysteries because of the unleveled effects of the electric force."

Author of this article is Dr. László Körtvélyessy, physicist and engineer of high temperature process technics and a candidate of the Hungarian Academy of Sciences. Most of this article is WAY over my head, but I pulled out a small bit that sounds like English to me. I found the article and photo about the electric universe here: http://www.the-electric-universe.info/The_idea.html and here: http://www.kronia.com/home.html
____________________
UPDATE:
http://bonniesbooks.blogspot.com/2007/04/update-on-worlds-in-collision-post.html
Posted by Bonnie Jacobs on 4/04/2007 10:27:00 AM
Labels: book review

(1) This web site ("Venus in the Corner Pocket") disputes Velikovsky's theory, but credits him with pushing scientists to consider ways the universe may have changed:
http://www.unmuseum.org/velikov.htm

(2) This one preserves Velikovsky's unpublished writings, including mention of electrical discharges in the "Confusion of Languages" section of "In the Beginning":
http://www.varchive.org

(3) And this one suggests further study and gives links to six groups studying Velikovsky's ideas. "Reviews and criticisms of Velikovsky's work have tended to be inaccurate, inconclusive or just plainly wrong. Velikovsky did make mistakes, but his key proposal, that in historical times mankind witnessed global catastrophes of cosmic origin, endures with increasing numbers of organisations and people investigating his work."
http://www.knowledge.co.uk/velikovsky/mankind.htm

Fascinating! I am not so bold to say that I understand it, or even really believe it, but all the same, theories like this have something about them that is intriguing.

I once read a book by Stephen Hawkins, and while I was reading I sort of 'got it', but I couldn't reproduce any of it afterwards...lol.

No, you didn't misinterpret it at all. The book quotes lots of ancient sources, so it sometimes says one thing and then something similar. I got the idea that the earth did not flip exactly so that the sun came up from the exact opposite direction, but generally from the other direction.

When I was in school half a century ago, we learned that the magnetic north had changed more than once. Velikovsky's book makes me think the "bump" between planets, electric or whatever, turned the earth around so that another part of the earth became the "north pole," so to speak. That moved icy regions into the tropics, and balmy places suddenly froze. Putting this into my local context, I can imagine the sun that has always (in my lifetime) set behind Lookout and Signal Mountains would now start rising from that direction.

If you can find an inexpensive copy of the book, I recommend it to you. I was surprised that several people in my small group that meets on Thursdays to discuss environmental issues had read Worlds in Collision by Velikovsky.

A decade or so ago, I read A Brief History of Time by Stephen Hawking and felt good that I managed to "get it" as I read, and it wasn't even the new illustrated version! It's not every day that I plow through Einstein's Theory of Relativity, quarks, and curved space; so I know how you feel, Margreet. Velikovsky's book is much, much easier to read and understand.

Thanks Bonnie for reassuring me that I'm not completely dim..:) I'll keep Velikovski in mind; our library may have it!