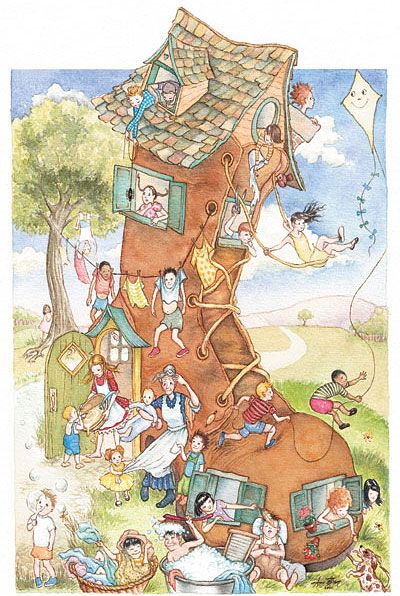 I got on Facebook in the first place so I could see photos of my grandchildren and great-grandchildren.  Now the powers that be at FB show me mostly photos of friends (and often not even my closest friends), rarely any from family and the people I'd most like to keep up with.  Now I'm getting lots and lots and LOTS of "suggestions" of people I might know and remote friends of my FB friends.  I don't CARE about adding more people!  I would really, really like to see the posts of my loved ones.
Nursery rhymes
When I was a child, I loved stories and poems like the one illustrated above, which was about "the old woman who lived in a shoe."  Do you know her, too?  Here's the poem I learned as a child in the 1940s:

There was an old woman who lived in a shoe.
She had so many children, she didn't know what to do.
She gave them some broth without any bread;
Then whipped them all soundly and put them to bed.

The version I remember (or think I remember) was "spanked them all soundly and put them to bed."  Wikipedia gives several variations of this, so my version was probably one that was published along the way.  Today, whipping or spanking would probably be considered child abuse, but it happened back in my day. 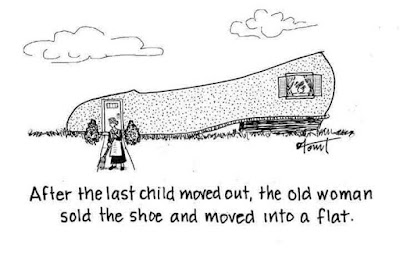 What I have enjoyed about Facebook is finding puns like this visual pun.  I love the idea that when the children grew up and moved on, their elderly mother moved into a flat.  The pun only works if you call women's shoes like these "flats."  I've always gotten a kick out of puns and playing with words.
Now, why I'm sharing all this:  I've decided I've had enough of Facebook, at least for now.  I'll spend my time reading the books on my shelves rather than random stuff Facebook decides to allow me to see.  So I'll post this on my blog and then post that link at the top of what I leave on Facebook for all the world to see.  Buh-bye, Facebook.  I've had enough of what YOU think I should be allowed to see.
Posted by Bonnie Jacobs on 8/04/2021 03:00:00 PM
Labels: punday

We are all frustrated with Facebook. Sadly, FB is driven by money rather than simply connecting people.