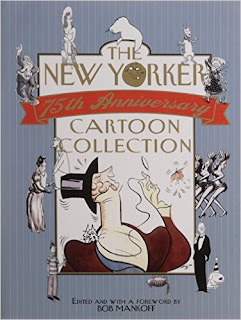 
This is the biggest and funniest collection of New Yorker cartoons ever assembled.  From the unforgettable classics to contemporary favorites, this drawing gallery spans nearly the entire 20th century.

I found this for a couple of bucks on the clearance shelves at a used bookstore and had fun perusing the cartoons.

As a cat lady, I laughed at the one showing the Sphinx stretching exactly like a cat with its rump in the air (p. 261).

As an elderly person, I grinned wryly at the doctor examining a man's finger and saying, "Well, Bob, it looks like a paper cut, but just to be sure let's do lots of tests" (p.221).

But the one that I saw when I randomly flipped through the book in the store is the one that made me buy it and the one that's still my favorite (p. 50):


A couple with antennae on their heads is under a fruit tree, which looks suspiciously full of apples.  A long serpent with forked tongue slithers across most of the foreground.  All three are looking around at an astronaut running toward them from a spaceship in the background, silhouetted against a sky full of planets.  He's yelling as he approaches them, saying, "Miss!  Oh, Miss!  For God's sake, stop!" 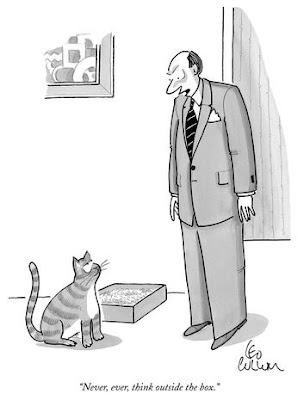 This cat cartoon from the book (p. 175) was also online.  I've seen it before, but it's still good.  Okay, four out of 707 cartoons ain't bad.  Did I count them?  Nope, I read the Introduction, which mentioned the number (p. ix).  By the way, the doctor cartoon is by Bob Mankoff, the book's editor.  He's the one who wrote the Introduction, which starts this way:


"Now me, you couldn't pay me to read an introduction to a cartoon book.  I'd jump straight to the cartoons.  You could, however, pay me to write one."