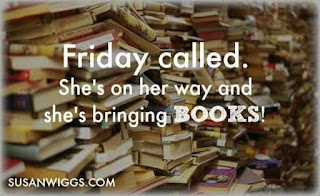 Today's Friday Five is brought to us by 3dogmom.


"We’ve been rearranging and reorganizing books at our house, a dangerous activity when trying to accomplish a task during precious leisure time — the lure of forgotten titles and favorite stories can be deliciously distracting, not to mention inspire a Friday Five theme.  Share with us some of your favorites."

1.  A cookbook ~ Unprocessed.  I rarely use cookbooks, so I'm sharing a "foodbook."  ("Foodbook" is now a word because I just used it).  I'm currently reading this foodbook, partly because I joined the 2015 Foodies Read Challenge.  (Notice how handy the word has already become; I've used it three times in three consecutive sentences.)  As a matter of fact, I am nibbling raw cauliflower as I look up books and compose this Friday Five. 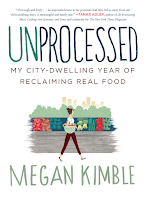 Unprocessed: My City-Dwelling Year of Reclaiming Real Food by Megan Kimble (2015) — "By way of harvest or heat, all food is processed, and often it is the better for it. ... I decided to see if I could go a year without eating a processed food. ... When I first hatched the project ... I thought that I should figure out precisely what made a food processed and then begin.  But as it turned out, it would take me a year to figure out where to draw the line, to understand where our food system succeeds and fails in processing food from land.  That figuring out is what you're holding in your hands." — from the Introduction.

2.  A novel ~ Some Luck.  I'm reading this for Tuesday evening's book club made up of women of my church and people they have introduced to the group.  I've taken a couple of my friends, and I know the mother of one is also on the email list.

Some Luck by Jane Smiley (2014) — It's 1920 in Denby, Iowa.  Rosanna and Walter Langdon have just welcomed their firstborn son, Frank, into their family farm.  He will be the oldest of five.  Each chapter in this extraordinary novel covers a single year, encompassing the sweep of history as the Langdons abide by time-honored values and pass them on to their children.  With the country on the cusp of enormous social and economic change through the early 1950s, we watch as the personal and the historical merge seamlessly:  One moment electricity is just beginning to power the farm, and the next a son is volunteering to fight the Nazis.  Later still, a girl we’d seen growing up now has a little girl of her own.

3.  A nonfiction book ~ Witnessing Whiteness.  I'm reading this one for an interfaith discussion with the Jewish synagogue next to my United Methodist Church.  We live in St. Louis, and the Ferguson Commission report has generated lots of conversations on racism and what we can do about it.

Witnessing Whiteness: The Need to Talk about Race and How to Do It by Shelly Tochluk (2010) invites readers to consider what it means to be white, describes and critiques strategies used to avoid race issues, and identifies the detrimental effect of avoiding race on cross-race collaborations. The author illustrates how racial discomfort leads white people toward poor relationships with people of color. Questioning the implications our history has for personal lives and social institutions, the book considers political, economic, socio-cultural, and legal histories that shaped the meanings associated with whiteness. Drawing on dialogue with well-known figures within education, race, and multicultural work, the book offers intimate, personal stories of cross-race friendships that address both how a deep understanding of whiteness supports cross-race collaboration and the long-term nature of the work of excising racism from the deep psyche. Concluding chapters offer practical information on building knowledge, skills, capacities, and communities that support anti-racism practices, a hopeful look at our collective future, and a discussion of how to create a culture of witnesses who support allies for social and racial justice. For book discussion groups and workshop plans, please visit www.witnessingwhiteness.com.

4.  A well-thumbed book to which you turn often, or with affection, used in our profession ~ Tao Te Ching.  Okay, it's Taoist, but before I retired from the United Methodist Church, I was also an adjunct teacher of religions of the world at Chattanooga State Community College in Tennessee.  I have more than a dozen different translations of this book, and I especially like this one by Ursula K. Le Guin, a non-theologian and a very good writer.  I started re-reading it on Monday, before meditating on wisdom.

Lao Tzu : Tao Te Ching : A Book About the Way and the Power of the Way by Ursula K. Le Guin (1997) — Le Guin, best known for thought-provoking science fiction novels that have helped to transform the genre, has studied the Tao Te Ching for more than forty years.  She has consulted the literal translations and worked with Chinese scholars to develop a version that lets the ancient text speak in a fresh way to modern people, while remaining faithful to the poetic beauty of the work.  Avoiding scholarly interpretations and esoteric Taoist insights, she has revealed the Tao Te Ching's immediate relevance and power, its depth and refreshing humor, in a way that shows better than ever before why it has been so much loved for more than 2,500 years.  Included are Le Guin's own personal commentary and notes on the text

5.  An author you recommend frequently to others ~ Marcus J. Borg.  I'm reading this last book published before he died.

Convictions: How I Learned What Matters Most (2014) — Do Christian beliefs still matter?  Do they really change us or the world?  Borg reflects on the convictions that he has developed over the course of his life and why they provide a path of hope for those seeking to be faithful Christiahs in the 21st century.  He explains why most of today's summaries of Christian belief fail to move us or guide us and serve mostly to keep score among the various Christian tribes.  He encourages today's followers of Jesus to become more rooted to the deep convictions that can actually lead us to transformation and renewal, both for ourselves and for our world.  Each chapter embodies a distinct conviction:


1.  Context Matters
2.  Faith Is a Journey
3.  God Is Real and Is a Mystery
4.  Salvation Is More About This Life than an Afterlife
5.  Jesus Is the Norm of the Bible
6.  The Bible Can Be True Without Being Literally True
7.  Jesus's Death on the Cross Matters — But Not Because He Paid for Our Sins
8.  The Bible Is Political
9.  God Is Passionate about Justice and the Poor
10.  Christians Are Called to Peace and Nonviolence
11.  To Love God Is to Love Like God

Bonus:  What are you reading now?  A Heretic's Guide to Eternity.  I'm reading all five of the books above, but I'll be happy to share one more.  I'm reading this one with a Disciples of Christ pastor and a few of her parishioners, one of whom is my best friend Donna.

A Heretic's Guide to Eternity by Spencer Burke and Barry Taylor (2006) — "A heretic is someone who sees a truth that contradicts the conventional wisdom of the institution — and remains loyal to both entities." — Art Kleiner, author of The Age of Heretics.  Distinguishing between religion and spirituality, Burke offers what he calls a new way of looking at God, one centered on the idea of grace.  He emphasizes a God who is looking to save the world, not a God who seems more intent on condemning certain practices.  For Burke, God is to be questioned, not simply obeyed.  His challenging thesis will appeal to many people today who have given up on organized religion but still seek some connection to spirituality.

I <3 Marcus Borg. And I have Witnessing Whiteness on my desk, waiting for me to have enough time and energy to truly devote to it.
The Foodbook sounds interesting!