Beginning ~ with a question about evolution 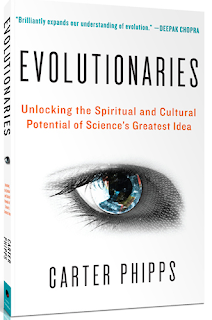 
"Do you believe the Bible, or do you believe in evolution?" The question came in an urgent whisper, passed around my eighth-grade science class with the guilty subterfuge of a dirty joke.  I was thirteen years old and already I understood that there were two kinds of people in my small town on the edge of the Bible Belt:  those who believed and those who didn't.

The author says evolution is a spiritual idea, as well as a scientific idea.  Provocative chapter titles reflect both aspects of evolution:


1.  Evolution: A New Worldview
6.  Novelty: The God Problem
9.  Evolving Consciousness: The Inside Story
13.  Conscious Evolution: Our Moment of Choice
15.  An Evolving God

Sounds interesting to me.

I wonder did this difference cause horrible problems in the community.

Sounds like a very interesting book. I've read other things on the same idea and it is one I find fascinating.

Confusingly, though, I recently read a book also called Evolutionaries that was about business leadership. :)

Thanks for joining me on Book Beginnings!