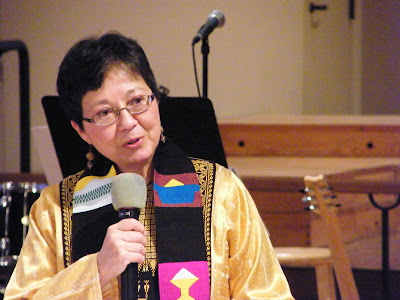 Rita and Rebecca take turns sharing their stories in this combination of memoir and theology.  Rebecca writes about growing up half Japanese in American — she was born in Japan to a Japanese mother and a U.S. soldier.  She explores the two cultures on pages 81-82.


Japanese culture values harmony in relationships and kinship.  Being individualistic or self-assertive was seen as pathological in my Japanese home, which valued humility and generosity.  Respectful behavior showed one belonged.  Whether one actually believed personally in ancestor spirits was less relevant than participating in rituals that demonstrated one's gratitude and respect for those who have passed on.

The Western version of Buddhism emphasized personal meditation practices, rather than adoption of its Asian cultural forms.  European American Buddhism tends to ignore kinship networks, formal ritual, and obligation to family members, living and dead.  North American Buddhism prefers to focus on individual spirituality and / abstract values such as "respect for nature," or "enlightenment," as a means to help practitioners transcend themselves, their families, and their community obligations.  Christianity functions in a similar way in Asia as Buddhism functions in the United States  Converts to Christianity use it to transcend the limitations of family and culture.  When religious ideas get separated from their cultural forms, they take on different meanings.  They move against a society's norms and grant people more individual freedom.

The values of my American life have often been at odds with my Japanese origins.  The anti-religious spiritual search so characteristic of Americans is part of my Protestant upbringing.  Protestant Christianity places above all else the relationship of the individual self to God, and U.S. society reflects this with its emphasis on indivual achievement, self-assertion, authenticity, and personal fulfillment.  The search for individual fulfillment is often based on an antagonism toward organized forms of religion — toward forms of religion that are social and community-based. ... I needed a way of being religious that connected me to others, that broke through my isolation, that gave me living presence.  Denver's life had done that, but not his theology.  [Denver was a Baptist preacher and father figure for Rita.]

Rita, who the author of the award-winning Journeys by Heart, is a research associate at Starr King School for the Ministry at the Graduate Theological Union in Berkeley, California.

I really enjoyed reading both Rita's and Rebeccas's stories, Bonnie---thank you for sharing them.

The two short bits of Rebecca's and Rita's stories (that I've shared so far) are from Part One ~ A Season of Ashes. There are still two more parts to go, with each woman writing something for each part. I'll look for something short enough to share from the other parts as I read them.

Beth, you may like reading the discussion I am having with my friend Ginny, who lives in Maryville, Tennessee. We discovered we were both reading the same book: The Great Emergence: How Christianity Is Changing and Why by Phyllis Tickle. Our discussion is on my Notes, Quotes, and Questions blog: