One book that's been on back order has finally arrived, and another six have arrived or been shipped.

Jesus Wars: How Four Patriarchs, Three Queens, and Two Emperors Decided What Christians Would Believe for the Next 1,500 Years ~ by Philip Jenkins, 2010


The fifth-century political battles that forever changed the church.  In this fascinating account of the surprisingly violent fifth-century church, Jenkins describes how political maneuvers by a handful of powerful characters shaped Christian doctrine.  Were it not for these battles, today's church could be teaching something very different about the nature of Jesus, and the papacy as we know it would never have come into existence.  This book reveals the profound implications of what amounts to an accident of history, that one faction of Roman emperors and militia-wielding bishops defeated another.

With or Without God: Why the Way We Live Is More Important than What We Believe ~ by Gretta Vosper, 2008


Envisioning a future in which the Christian church plays a viable and transformative role in shaping society, Gretta Vosper argues that if the church is to survive at all, the heart of faith must undergo a radical change.  Vosper, a minister in Toronto, believes that what will save the church is am emphasis on just and compassionate living — a new and wholly humanistic approach to religion.  Without this reform, the church as we know it faces extinction.

Worship Come to Its Senses ~ by Don E. Saliers, 1996
What makes Christian worship both true and relevant to ever-changing human circumstances?  How can our gathering about the Scriptures, the Table of the Lord, and the waters of baptism shape and express authentic Christian faith in the world of everyday life?  Saliers finds a fresh way of answering these questions by exploring four "senses" of God:  awe, delight, truth, and hope.  Why are wonderment, surprise, truthfulness, and expectancy so often missing or diminished in Christian liturgy today, whether Protestant or Roman Catholic, "high church" or "low church," "traditional" or "contemporary"?  Saliers contends that we are still restless for communion with God, and suggests how these essentials may be rediscovered by every worshiping congregation.


The gap between knowledge born of personal experience and traditional theology led the authors to write this exploration of the doctrine of the atonement.  Using an unusual combination of memoir and theology in the tradition of Augustine's Confessions, they lament the inadequacy of how Christian tradition has interpreted the violence that happened to Jesus.  Ultimately, they argue, the idea that the death of Jesus on the cross saves us reveals a sanctioning of violence at the heart of Christianity.  Brock and Parker draw on a wide array of intimate stories about family violence, the sexual abuse of children, racism, homophobia, and war to reveal how they came to understand the widespread damage being done by this theology.

Saving Paradise: How Christianity Traded Love of This World for Crucifixion and Empire ~ by Rita Nakashima Brock and Rebecca Ann Parker, 2008


When the authors began traveling the Mediterranean world in search of art depicting the dead, crucified Jesus, they discovered that it took Jesus Christ a thousand years to die.  Christians filled their sanctuaries with images of Christ as a living presence in a vibrant world.  He appears as shepherd, teacher, healer, enthroned god, infant, youth, bearded elder, but never dead.  When he appears with the cross, he stands in front of it, serene, resurrected.  But once Jesus perished, dying was virtually all he seemed able to do.  The authors ask how the early vision of beauty evolved into one of torture.  Changes in society and theology marked the medieval emergence of images of Christ crucified.  They found imperial strategies embedded in theologies of redemptive violence, which sheds new light on Christianity's turn to holy war.  They ground justice and peace for humanity in love for the earth and open a new future for Christianity through a theology of redemptive beauty.

The Scandalous Gospel of Jesus: What's So Good about the Good News? ~ by Peter J. Gomes, 2007


"What did Jesus preach?" asks Gomes, who believes that excessive focus on the Bible and doctrines about Jesus have led the Christian church astray.  To recover the transformative power of the gospel — "the good news" — Gomes says we must go beyond the Bible and rediscover how to live out Jesus's original revolutionary message of hope.

Sun of Righteousness, Arise! : God's Future for Humanity and the Earth ~ by Jurgen Moltmann, 2009


Moltmann brings together the biblical, historical, and theological elements of a new integrated Christian vision of the world, especially in light of our contemporary understandings of nature and the evolving universe.  Anchored in the resurrection of Jesus, such a vision affirms that God is the God of resurrection promise, God is present in justice and righteousness, Jesus is the son of righteousness, and nature can be seen as the site of God's work toward the fulfillment of life.  Here is a theological vision that can integrate our faith, inform our worldview, and fuel our life engagements.

The Only Way : From Cruelty to Compassion through Inner Transformation ~ by Gerald May, 2002 (three audio tapes) 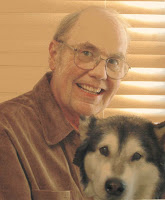 The topic of these tapes fits the subject I'm studying right now (transformed lives that lead toward compassion), so I need to learn more about Gerald May and about Shalem Institute.  To read an excerpt from an article he wrote, click The Only Way : Cruelty to Compassion, Personal Transformation.

Gerald May (1940-2005) was well-known for his writings on psychology and spirituality.  From 1983 to 2005, he served at the Shalem Institute in Washington, DC, as Director of Spiritual Guidance, as Director for Research and Program Development, and finally as Senior Fellow in Contemplative Theology and Psychology.

I need a break, but here's something for you to think about while I'm away from the blog. 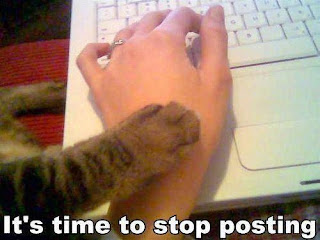 ... and do something about this book mess... 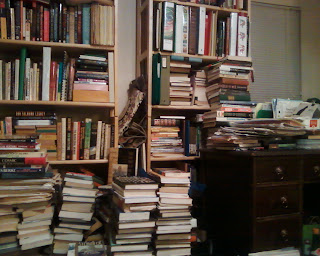 Haha...well, all you REALLY need are more shelves, Bonnie! Seriously, I can so relate. Our books have definitely outgrown our little doublewide. Tall, teetering stacks everywhere. I've been asking my carpenter husband for more shelves, but he gently suggests that perhaps I could let go of a few books. :-)

I'm really impressed at how throughly you immerse yourself in a subject, Bonnie.

Yeah, I can relate, too!