If the Church Were Christian ~ by Philip Gulley 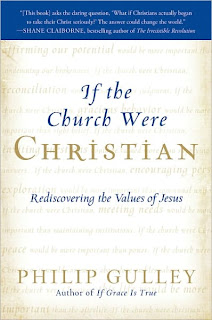 If the Church Were Christian: Rediscovering the Values of Jesus ~ by Philip Gulley, 2010, religion


Consider this:  Jesus offered no new revelation from God.  Everything he said and did grew out of his Jewish faith.  As in all religions, there were those in Judaism who'd forgotten and forsaken its principles.  What first-century Judaism needed wasn't a new revelation, but the reminder of a previous one.  The prophets preceding Jesus had described well the priorities of God — mercy, forgiveness, hospitality, and compassion.  Jesus exemplified those virtues, expanded their meaning for his generation, and through the power of his good example, urged others to not only imitate his works, but to exceed them.

What Jesus wasn't about was his own glorification and elevation.  Rather, he argued for humility, modesty, and putting others before self.  This was not a man claiming a special status for himself, but a man committed to faithfully living out the priorities of God's reign and helping others do the same.  Being a fitting example was precisely what he was about.  Instead of accepting that, the church made Jesus God, interpreting his life in ways he likely didn't intend, convincing itself that his way of living was only possible because he was God, providing humanity an excuse not to be like him.  In my twenty-five years of pastoral ministry, I have heard people say time and again, "I could never be like Jesus."  But what I've discovered in the Gospels is the expectation that we could and should be like him.

The Christian gospel ought not be that Jesus was God and we can find life in his death.  Our good news is that we can find life in his example — accepting the excluded, healing the sick, strengthening the weak, loving the despised, and challenging the powerful to use their influence redemptively.  These objectives do not require divinity, but commitment, compassion, and courage.  Jesus accomplished what he did not because of some supernatural power unavailable to the rest of us; he accomplished what he did because of his steadfast dedication to the priorities of God.

These three paragraphs are from pages 25-26 of the first chapter, entitled "If the church were Christian ... Jesus would be a model for living rather than an object of worship."
Posted by Bonnie Jacobs on 8/24/2012 11:13:00 PM

All great ideas. So many people have told me I am Christian (or Catholic) since I am kind, caring, and generally a good person. Wouldn't it be nice if everyone had those qualities and didn't assign them to a specific religion?

I realize that isn't what the passage was about exactly, but it's what it made me think about. I do like the idea that one needs compassion, commitment, and dedication to do good rather than divine intervention

I think you have it exactly right, Helen. You ARE kind and caring and good, not because of a religion. As we all know, religions can harbor some really hateful people.