How to meet authors ~ Wes Rehberg 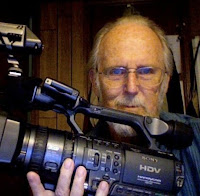 Today's author is Wes Rehberg and, at the end of this post, you'll see why I show him holding that huge video camera.  I met him in Sunday school a mere two weeks ago.  I had heard about the retired pastor and his wife Eileen, who had moved to Chattanooga from upstate New York and had been attending the Seekers class on Sunday mornings.  When I finally met him a couple of weeks ago, on July 22, he had brought a copy of his latest book to class with him.  Hey, nobody had mentioned he was an author.

Political Grace: The Gift of Resistance ~ by Wes Rehberg, 2012

Philosophy and theology have increasingly turned to the problem of the rising numbers of people who live in severe conditions of oppression, people who are surplus to global economic and political orders which the oppressed define as "neoliberal" and "neocolonial."  This work, Political Grace: The Gift of Resistance, is part of that turning, through conversations with those who were and still are living under oppressive conditions, especially in Central America and Mexico, and through conversations with phenomenology, feminist theology, feminist jurisprudence, ethics, and liberation theology.  There is an assertion that grace, and the organization of the "lifeworld" which phenomenologists discuss, act in concert to seek to empower the flourishing of humans to understand and resist the abasing conditions they confront.  What frequently occurs when people living under oppressive conditions try to change their circumstances is a backlash by those who control their political, social, and economic conditions.  In response, the spirit of grace, as part of the human effort to flourish, aids in the resistance against the denial of this flourishing.

When Wes and I exchanged business cards, I learned that he does both "writing and film works."  He's a former journalist and founded a company called Wild Clearing.  When I got home, I went online to find out more and discovered our library has copies of two of his documentaries.

"Chattanooga's Homeless Challenge: A Documentary Film" gives homeless people a voice and also shows opportunities that allow them to transition out of homelessness.  When I watched this first video, I was surprised to see that a big part of it is about "Barry's church" (for then pastor Barry Kidwell) — which used to be "Bonnie's church," though we weren't set up to assist the homeless when I was the pastor at Forrest Avenue United Methodist Church from 1987 to 1991.

"Tracing Chattatonia" is another video by Wes that's available from my public library.  It's a 45-minute video collage that "contains spontaneously 'found' scenes from the Chattanooga region in 2006, compiled experimentally and interpretively, as a collage on a timeline."

Wes also has a blog called Writing in the Wild Clearing and a web site for experimental video art work he calls The Video Curio Theater.  Wes says, "The theater is open," so go take a look.

I've included Wes's video on the "Chattanooga Homeless Challenge" on the blog I've created for teaching DISCIPLE Bible Study in 2013. Here's the link: