The bowling lanes across the road invited residents of my apartment complex for an evening of free bowling, shoe rental, prizes, and food.  I went, although I haven't bowled in 30-35 years.  I used a 10-pound ball for my first game, though I had used my husband's heavier bowling ball years ago.  I didn't do very well at all, with lots of gutter balls.

Vickie's husband Bob was trying to move his ball over, using body language.  I met Vickie at the luau last summer, shortly after moving into my apartment complex.  We met again at the Christmas party and have now bowled together.  Three times a year ain't bad, except Vickie said they are moving to another state.  Just when I was getting to know her.  Oh, well, bye, Vickie, it's been fun!

We four — LaBraia, Bob, Vickie, and I — had small children bowling in the lanes on each side of us, sometimes rushing up beside us, forgetting to take turns.  This girl was waiting for me to finish.  Nine of the ten pins fell, leaving one (see the next photo).  Notice the lane on my left has the rails up for the child about to take his turn after me.  It was funny to watch his ball go wildly to the side, bounce off the left rail, bounce off the right rail, and — surprisingly — sometimes score better than we adults did.

Vickie clicked the camera before I'd even swung the ball behind me, but I did hit that last pin standing down there at the other end of the lane.  For my second game, I chose a 12-pound ball and more than doubled my score.  But I'll need lots more practice before I get back in the swing of the game.  I did, however, make three strikes during my three games — none in the first game (which we'll call "warming up"), twice in game two, and once in my third game. 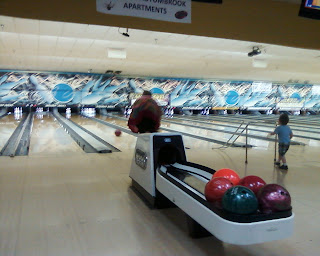 And here's Vickie, mostly hidden behind the equipment.  As you can see, the little boy in the next lane was moving in for his turn.  I don't think any of us will be "Bowling with the Stars" any time soon, even if someone comes up with such a thing.  But it was a family fun night, with lots of laughs and high-fives.
Posted by Bonnie Jacobs on 7/26/2012 01:41:00 AM

It sounds like a really fun evening! I am not a good bowler, but it is fun to go every couple years, wear shoes that many others have worn, and remind myself that the Pro Tour isn't waiting for me!

What a nice gesture for the bowling alley to invite you all! Sounds like you had a good time.

I've always loved bowling, even if I'm not all that great at it. I was even in a league when I worked for the newspaper. I wear my old bowling shirt all the time. Your evening sounded like a lot of fun, Bonnie.

Susan, the bowling alley also gave us a pitch to "bowl for 8 weeks for only $8.00 per week and everyone gets their own bowling ball!!!" While giving out prizes, they suggested we start a league. Attached to that flyer about "8 for 8" is a coupon for one free game of bowling to get us started. It's advertising. When temps were hitting 100-degrees last month, their billboard at the road suggested people play inside, where it's cool.

Oops! Upon enlarging that second photo of me, where I thought I made that spare, I see the bowling ball to the left of the pin. So I didn't make it, after all. Not that time, anyway. I remember hitting that single pin left standing a couple of times, maybe three, but not when Vickie took THAT photo.

Even though it's an obvious advertising ploy it might be a good thing to start doing... it's a wonderful way to exercise.

You're right, Ginnie, and that's why I'm considering it. I didn't find anyone else interested, but I can ask at the office. Maybe I'll find other neighbors, though maybe only folks the age of my grandchildren!