They reach for strings of beads.  They spin colourful wheels.  They light candles.  They raise their arms.  They hold one another's hands.  They wave smoke toward their faces and over their bodies.  They bow their heads.  They hang flags on string and leave them to fade into the wind.  They stand before a community and open their hearts.  They dance.  They set lights afloat on murky waters.

People of faith the world over assume such positions, enter into such actions, begin such rituals, and without a word of explanation, any who see them know that they are moving into what is for them a sacred moment. 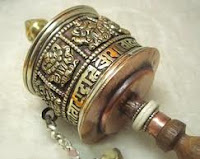 Imagined one after another on the first page of chapter one, these rituals seem totally unrelated.  Yet they all relate to ways people pray. I'm reading this book — Amen by Gretta Vosper — because a friend thought I'd like it.  I'm torn between wanting to finish this one so I can return it to him and reading the other new books that came into my house last week and this week.  It wouldn't quite work, though, to try to race through six or eight books at the same time.  I'd have them all confused.

Here's a synopsis of the book:

Amen: What Prayer Can Mean in a World Beyond Belief by Gretta Vosper, 2012

For many people, prayer is an essential part of their daily lives, connecting them with God, a force, or the universe, bringing them, among other things, assistance and protection. Prayer makes their lives more meaningful, and in that meaning their worlds make sense. They cannot imagine living without such an important facet of their lives, and as a result of their introspection, they live fuller, deeper lives and offer wider service to others.  Increasingly, however, prayer has become a tradition that has some meaning, but as ritual, not as a vehicle that delivers true significance for those who worship. Despite what it may have meant to previous generations, prayer now holds only a symbolic place in our busy lives and the deeper kinship with community is lost in the vestments of antiquated traditions.  In Amen, Gretta Vosper, United Church minister and author of the controversial bestseller With or Without God, offers us her deeply felt examination of worship beyond conventional prayer, a new tradition built on love and respect rather than on the rituals of ancient beliefs.

That opening certainly leaves no doubt what the book is about, and it does sound interesting. Prayer is so personal for me that I really can't imagine seeing it as simply "ritual." I've always loved the expression "to breathe a prayer" because that come closest to describing how I pray.

Prayer is so different for different people. It looks like the book looks at all different forms of prayer. Interesting choice. Here is my post:
Book Beginnings

That is a beautiful beginning. It sounds like the book may be more controversial than the opening lets on.

Thanks for taking part in Book Beginnings on Friday!

I love YOUR post opening. Despite all its rituals, religion and faith are so personal and this is one book I would love to read!

Here's mine. Plus I have a giveaway of my featured book starting tomorrow: http://guiltlessreading.blogspot.ca/2012/07/friday-56-book-beginnings-lovely.html

Love the pulsing rhythm of the repetitive "they"! A setting rich with culture and ritual! Descriptive opening!

I like the details. I can picture the scene very well.