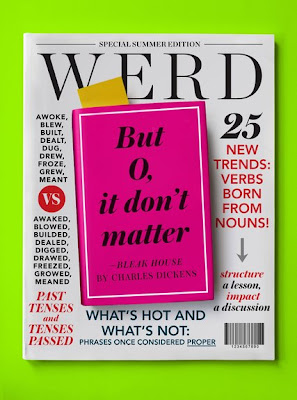 “Much was said, and much was ate, and all went well.”  Thus begins an article by John McWhorter on the opinion pages of the New York Times yesterday entitled A Matter of Fashion.  The sentence is straight out of Jane Austen's Mansfield Park.

“But, O, it don’t matter!” is from Bleak House by Charles Dickens.  It was spoken by Richard Carstone, a character who was studying law and medicine and, as McWhorter says, generally used "perfectly blackboard-style English."

What an interesting article, Bonnie! It's funny how wrong the grammar Austen, Dickens, and Adams used sounds to my modern ears.

I do think that using proper grammar is important, as people certainly do judge you by your words. I don't think I'd conclude that someone was dumb, though, just because their grammar was improper. But some do, I reckon.

It's funny, I am not a huge grammar person, but there are a few that drive me crazy: when people get less/fewer mixed up; words that should end in "ly" but people leave it off; and different from (most people say different than). :-)